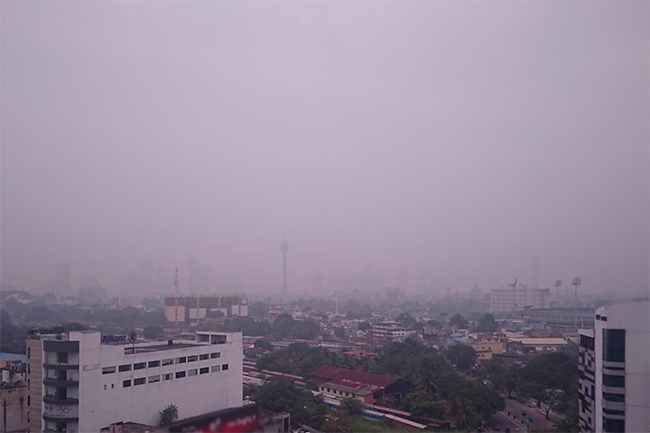 The atmospheric pollution experienced in Sri Lanka is expected to clear gradually as the pollution level of the airflow from India to Sri Lanka is receding fast, the National Building Research Organization (NBRO) says.

The latest air quality report would be issued later this morning, the NBRO said further.

Health experts urged caution yesterday as the quality of air in many parts of the island dropped further to an unhealthy level.

The foggy or misty conditions observed over the past few days were reportedly a result of an influx of particulate matter contaminating Sri Lanka’s air space through strong winds from India.

Parts of the island are experiencing gusty winds and intermittent rainfall as the deep depression over southeast Bay of Bengal has now concentrated into a cyclonic storm “Mandous”.

It was reported that crop residue burning in the vicinity of New Delhi had contributed to the surge in air pollution in the Indian capital. Meanwhile, the use of fireworks for Diwali festival was also blamed for exacerbating the situation.

The Air Quality Index is based on the measurement of particulate matter (PM2.5 and PM10), Ozone (O3), Nitrogen Dioxide (NO2), Sulfur Dioxide (SO2) and Carbon Monoxide (CO) emissions.

Children, elders and those who are suffering from respiratory ailments and allergies were advised against prolonged outdoor activities due to the low air quality in the country. They were urged to wear face masks when they are outdoors.