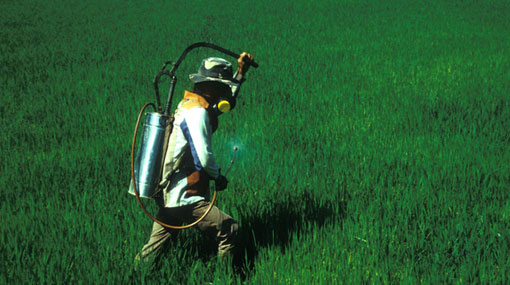 The government today banned the use and sale of pesticides containing five certain ingredients including Glyphosate, which has been linked to the dramatic increase in Kidney Disease in the North Central Province.

In a Gazette Notification, the Registrar of Pesticides Dr. G.A.W. Wijesekara stated that every license issued in respect of pesticides containing the active ingredients Glyphosate, Propanil, Carbaryl, Cholopyrifos and Carbofuran have been modified.

Pesticides containing the said active ingredients are therefore prohibited from being used, offered for sale or sold within the Districts of Anuradhapura, Polonnaruwa, Kurunegala and within the Divisional Secretariat, Divisions of Mahiyanganaya, Rideemaliyadda, Kandaketiya in the Badulla District.

Dr. Wijesekara says that the order was issued, with effect from Monday (Dec. 22), in the interest of the public and on the advice of the Technical and Advisory Committee.

According to a study published in the International Journal of Environmental Research and Public Health, the active ingredient known as glyphosate becomes highly toxic when mixed with ‘hard’ water or heavy metals like arsenic or cadmium that naturally exists within the soil or added as fertilizer.

In March, President Mahinda Rajapaksa approved the immediate removal of pecticides containing Glyphosate from the local market after an investigation carried out by local medical specialists and scientists revealed that kidney disease was mainly caused by the herbicide, however the proposal was not signed into a law.

Starting in the mid-1990s, this Chronic Kidney Disease of unknown aetiology (CKDu) was discovered among the rice paddy farmers in the North Central Province (NCP) of Sri Lanka.

Over the next two decades, the disease spread rapidly to the other farming areas. The prevalence of the disease is estimated at 15 % affecting a total of 400,000 patients with an estimated death toll of around 20,000.