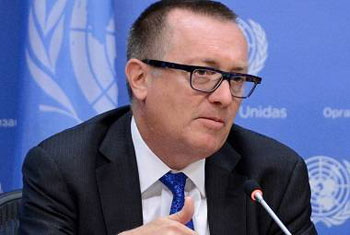 Feltman, who arrived in Sri Lanka on Saturday (28), was speaking at a press conference held in Colombo today, at the conclusion of his four-day official visit to the island.

The Under-Secretary-General for Political Affairs visited Jaffna on Monday - where he also met with the Governor and Chief Minister of the Northern Province.

Feltman said he had urged the government “to take steps in the short term to address issues regarding land, detentions, disappearances, and the military posture in civilian areas”.

The United Nations and world powers expected Colombo to develop a “strong framework for accountability that meets international standards and norms,” he added at the end of a four-day visit.

The Under-Secretary-General said he had underscored the expectation by the United Nations and by the international community that the government will in the longer term — as it has promised — develop in the coming months a strong framework for accountability that meets international standards and norms and that is seen as credible across Sri Lanka.

“These are not easy tasks, but we believe that they are essential tasks, expected by the international community and also — more importantly — by the citizens of this country themselves,” he said, adding that Sri Lanka should use the time from now to September to address various pending issues.

His visit and remarks come at a time when the Human Rights Council has deferred a key report on Sri Lanka’s rights record that was due for submission at the ongoing session in Geneva.

Speaking on the tasks ahead, Mr. Feltman said the government had to address the “wide trust deficit that existed between the Tamil and the Sinhalese communities.

Assuring the U.N.’s support to Sri Lanka’s domestic mechanism, he said first it was and foremost for Sri Lankans themselves to shape how to address issues of the past in order to find a common future.

The credibility of the process, he said, would have to convincing for those whose concerns the report sought to address.

TAGS :  UN Under-Secretary-General for Political Affairs ,  Jeffery Feltman ,  UN ,
Disclaimer: All the comments will be moderated by the AD editorial. Abstain from posting comments that are obscene, defamatory or slanderous. Please avoid outside hyperlinks inside the comment and avoid typing all capitalized comments. Help us delete comments that do not follow these guidelines by flagging them(mouse over a comment and click the flag icon on the right side). Do use these forums to voice your opinions and create healthy discourse.