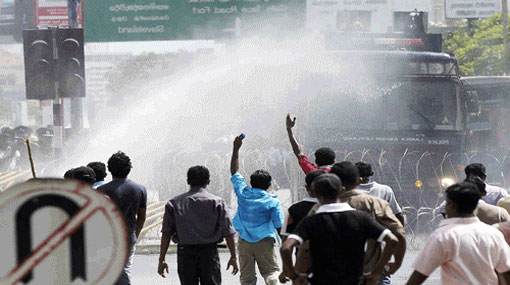 Over 120 arrested after tense situation at Jaffna protest

At least 127 persons have been arrested in connection with the tense situation occurred near the Jaffna Court complex, this morning (20), the police said.

Police used tear gas to disperse the protesters who were behaving violently near the Court over a rape and murder of a girl in Kayts.

The tense situation arose as the suspects in the case were brought to the court, this morning.

Police said that some 127 protesters were arrested following the clash, which resulted in at least 4 police officers sustaining injuries.

Police have arrested nine suspects in connection with the kidnapping, rape and murder of the 18-year-old student, who was on her way to school in Punkudithivu, Jaffna.