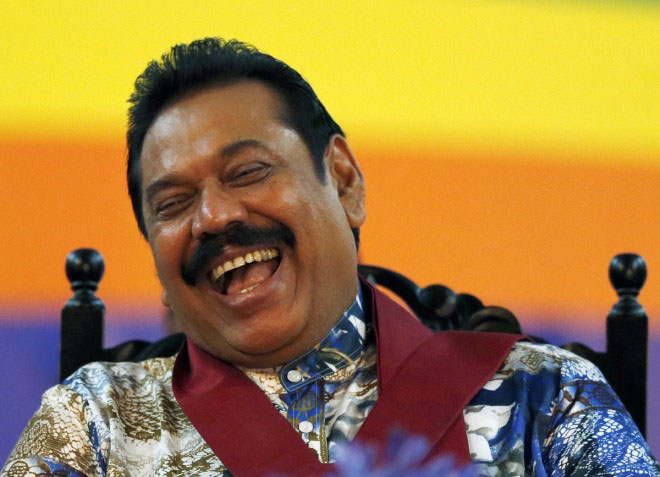 UPFA decides to give nomination to Mahinda Rajapaksa

The United People’s Freedom Alliance (UPFA) has decided to give nominations to former President Mahinda Rajapaksa to contest at the upcoming General Election on August 17 under the UPFA ticket.

A statement issued by the UPFA General Secretary Susil Premajayantha states that as discussed at the UPFA party leaders’ meeting held last evening (02), a decision has been taken to give nominations to the former President to contest the 2015 General Election from the UPFA.

The UPFA party leaders’ meeting was chaired by President Maithripala Sirisena, who is the Chairman of the Sri Lanka Freedom Party (SLFP) and leader of the UPFA.

Accordingly, the nominations of the United People’s Freedom Alliance would be prepared within the next couple of days, the statement said.

It further states that after the party’s nominations are compiled the Elections Operations Committee of the UPFA will convene with the participation of other political parties in the alliance.

On Wednesday (June 01), Rajapaksa announced that he intends to re-enter politics and stand in parliamentary elections next month.

Speaking in front of a large crowd of supporters in his home district, Mr Rajapaksa said he could not reject their clamour for him to stand.

But it was not clear which party the former president would represent.

Mr Sirisena, the new leader of the Sri Lanka Freedom Party (SLFP) which Mr Rajapaksa led for 10 years prior to his downfall, has previously ruled out appointing him as candidate.

Following the UPFA party leaders’ meeting yesterday, Premajayantha had stated that President Sirisena had assured that he would discuss the matter with his parliamentary group and announce his decision today.

In his speech on Wednesday in his home town of Medamulana, Mr Rajapaksa said that he and his supporters “will contest and look to form the next government”.

Mr Rajapaksa did not say if he was aiming to become prime minister, instead choosing to invite “all political parties to join hands” with him for the 17 August vote.

Last week, President Sirisena dissolved the parliament, paving the way for fresh parliamentary elections in mid-August, eight months ahead of the schedule.

TAGS :  Mahinda Rajapaksa ,  Maithripala Sirisena ,  UPFA ,  SLFP ,  Susil Premajayantha ,  General Election ,
Disclaimer: All the comments will be moderated by the AD editorial. Abstain from posting comments that are obscene, defamatory or slanderous. Please avoid outside hyperlinks inside the comment and avoid typing all capitalized comments. Help us delete comments that do not follow these guidelines by flagging them(mouse over a comment and click the flag icon on the right side). Do use these forums to voice your opinions and create healthy discourse.