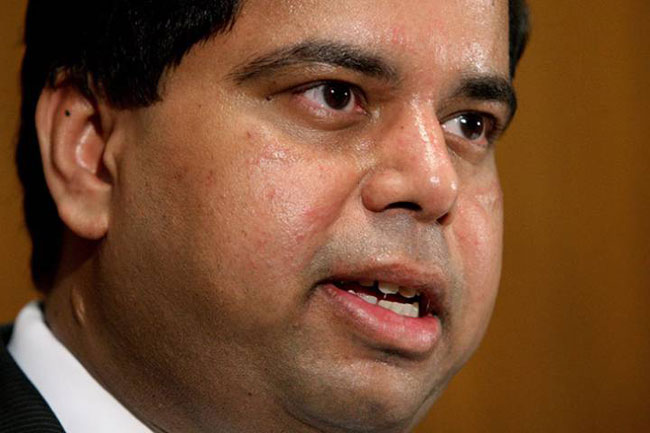 Gary Anandasangaree has won the new riding of Scarborough-Rouge Park for the Liberal party, beating the Conservatives after the party dropped candidate Jerry Bance late in the campaign, Canadian media reported.

Anandasangaree, a lawyer by profession, is the son of veteran Sri Lankan Tamil politician V. Anandasangaree, who is the leader of the Tamil United Liberation Front (TULF).

Anandasangaree surged ahead of the other candidates with an overwhelming majority of the vote. Conservative Leslyn Lewis came in a distant second, followed by NDP candidate Rev. Kantharatnam Shanthikumar, Canada’s Global News reports.

The Liberal Party candidate polled 29,906 votes while Lewis received only 13,604.

The riding was thought to be a close three-way race, but Bance was dropped in September after he was reportedly caught on camera urinating in a coffee cup in 2012 in a highly publicized scandal.

The departure of Bance left the party scrambling to find a new candidate late in the race, opting for Lewis as a fill-in candidate.

The riding is brand new in this election and was created by combing pieces of three others: the eastern portion of what used to be Scarborough-Rouge River, the Scarborough portion of the former Pickering-Scarborough East and part of Scarborough-Guildwood.

If the boundaries were the same in the 2011 federal election, voters would have voted 34.8 per cent Liberal, 31.6 per cent Conservative, and 31 per cent NDP.

Meanwhile incumbent NDP candidate Rathika Sitsabaiesan, who is of Sri Lankan-origin, lost her seat in the riding of Scarborough North.

Sitsabaiesan, who was first elected in 2011 in the former riding of Scarborough-Rouge River, was seeking re-election but Liberal Party’s Shaun Chen, a new contender and TDSB Chair, has claimed victory.

Sitsabaiesan was the first Canadian of Tamil origin to be elected to Parliament.

TAGS :  Gary Anandasangaree ,  V. Anandasangaree ,  TULF ,  Leberal Party ,  Canada ,  general election ,
Disclaimer: All the comments will be moderated by the AD editorial. Abstain from posting comments that are obscene, defamatory or slanderous. Please avoid outside hyperlinks inside the comment and avoid typing all capitalized comments. Help us delete comments that do not follow these guidelines by flagging them(mouse over a comment and click the flag icon on the right side). Do use these forums to voice your opinions and create healthy discourse.