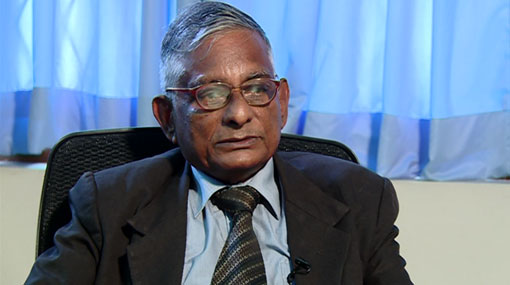 The Chairman of Sri Lanka’s three-member probe commission says that certain isolated incidents that may have occurred outside the activities of the war should be investigated in depth to come to conclusion.

He said that whether to permit foreign involvement in the mechanism, more than observing, is a political decision. “Those are political decisions we never wanted to tread,” Maxwell Paranagama told Ada Derana in an interview.

The Paranagama report, which was presented to Parliament on Tuesday, is relevant to the commission’s second mandate which is to inquire into violations of international human rights law during the last phase of the war, the period from January 01 to May 18, 2009.

“In this report we have set out in detail how the international laws become applicable into these incidents,” he said.

Thereafter we have set out in detail the incidents that occurred through both the security forces and the LTTE during the phase of the war and analyze them, he said.

“We also have set out where on the face of evidence we received and also other evidence from various material where you can accept certain wrongs have been accepted without much investigation.”

But there were a few incidents that were of very public importance, incidents like the Channel 4 video, the white flag case and surrendees going missing, Mr Paranagama.

“Those are isolated incidents that may have occurred outside the activities of the war which we say they should be investigated in depth to come to conclusion,” he said.

“At no time have we come to conclusion those wrongs have been committed by our security forces. We can also say security forces always acted for the safety of civilians. They took all precautions. They created No Fire Zones. They always acted in defence of the civilians. Sometimes they had to shoot to save civilians. In the midst of this crossfire some civilians may have died.”

“We have applied that humanitarian principle proportionality and we have analyzed to what extent it can be justified in regard to the number that may have died and what the army achieved by doing so,” he added.

“I could say we have set out a balanced report also when you overall take into consideration our forces have done a humanitarian operation sometimes you cannot have nil casualties because it’s a war with both sides dealing with arms.”

“We have also suggested a mechanism,” he said, adding that if someone had done wrong - be they LTTE or our security forces – “how they can go through a process of freeing themselves.”

“We have said setup a special High Court so that if some soldier is alleged to have committed crime may go before the High Court and proving his innocence by going through the process of law,” he said.

“Putting into operation what we have suggested is not a difficult task.” We have recommended the process, he said.

Speaking on the 2011 report of the US Secretary-General’s Panel of Experts on Accountability in Sri Lanka, he said that: “We have been critical of the Darusman report but there are instances we have accepted some of those things said.”

He stated that all the data and statistics the commission has analyzed point to a figure of about 7,000.

“To be honest about it even considering this we can’t come to an exact number but considering all these facts we can definitely say it is not 40,000 as set out in the Darusman report.”