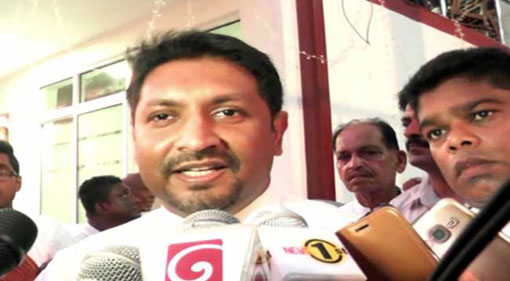 No LTTE prisoners will be released -Minister Ruwan Wijewardene

LTTE suspects who are alleged of serious offenses will not be released despite the protests held in North under political agendas, State Defense Minister Ruwan Wijewardene said.

He made this statement during a ceremony held in Biyagama.

“A group of TNA MPs are attempting to collapse the peaceful live hood of Northerners by holding Harthal. These prisoners are not political prisoners as interpreted by the TNA. Investigations have revealed that they are a set of former LTTTE members engaged in a number of crimes during the period of war. Therefore it is clear that these protests are driven by political needs of a minority.”The Minister added.

Meanwhile, A court order was issued today(14) by the Jaffna Magistrate ,banning  protests in Jaffna during President Maithreepala Sirisena’s official visit to Jaffna.

The court order was issued by Jaffna Magistrate S.Sadeeshkaran upon a request made by Jaffna Police.

However a protest was led by Northern PC member M.K Sivajilingam, despite the court order,off Jaffna Hindu College, demanding the release of political prisoners.

Shops in the Northern Province decided to close their business establishments yesterday (13) as a mark of protest demanding the release of Tamil political prisoners.