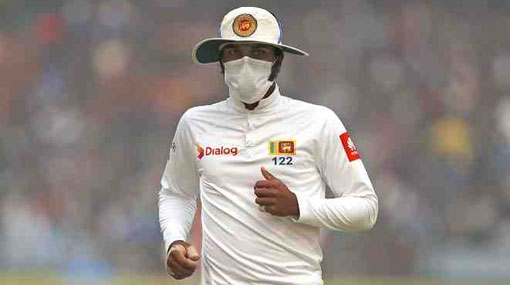 The green panel was irked by Delhi authorities for conducting the third Test which was disrupted due to the choking smog.

The Sri Lankan cricket team had complained of poor air quality that forced India to declare their innings on Sunday - day two of the currently ongoing third Test.

“Every newspaper has been carrying headline that the air pollution was going to be higher this week. Still, you took no action. Even the players were playing the match wearing masks. You should not have held the match if the air quality was so bad. Are people of Delhi supposed to bear this?” the bench said.

On the 2nd day of the 3rd Test match post lunch, Sri Lankan players were seen wearing anti-pollution masks, the first time in Test history to do so. Visitors had interrupted the game on three different occasions as their players (Lahiru Gamage and Suranga Lakmal) complained about the situation showed discomfort while breathing and bowling.

This constant stoppage unfolded a lot of drama, with Dinesh Chandimal, umpires and Virat Kohli in animated chat, later team officials came on the field and finally, India declared after the third interruption in the innings.

The Delhi-NCR inhaled toxins on Sunday. In at least seven out of 22 monitoring stations registered a “severe plus or emergency” level of air quality. The Air Quality Index (AQI) measured in Delhi on Sunday at 4 PM was 351 (on a scale of 0 to 500), and by 6 PM it reached 361.

On Saturday, the AQI of Delhi was 331. At ITO, which is about two kilometre from Firoz Shah Kotla cricket stadium, the air quality was “very poor” with the major pollutant PM2.5 or particles with a diameter less than 2.5 micrometres, was recorded 212 units -- over eight times the safe limit