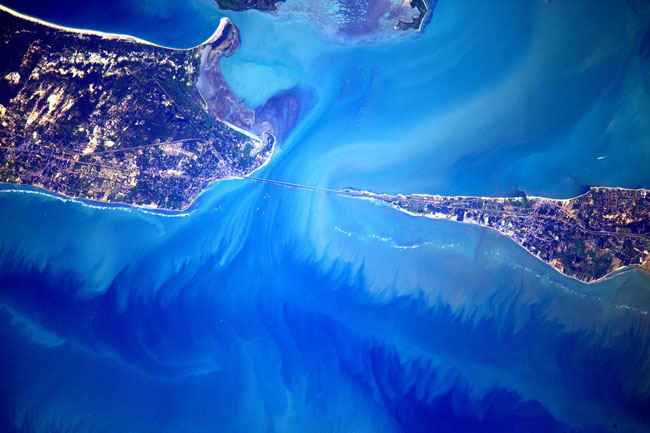 Are the ancient Hindu myths of a land bridge connecting India and Sri Lanka true? Scientific analysis suggests they are. #WhatonEarth pic.twitter.com/EKcoGzlEET

According to a Science Channel promo, scientific analysis shows that rocks on a sandbar between southern Tamil Nadu and Sri Lanka - said to have been the king Raavan’s kingdom - are 7,000 years old. But the sand itself is only four millenia old.

A promo released by the US channel suggests that the bridge - also called Adam’s Bridge - may not be a natural formation and may have been built by humans.

A promo released by the channel suggests that the bridge - also called Adam’s Bridge - may not be a natural formation and may have been built by humans.

“Are the ancient Hindu myths of a land bridge connecting India and Sri Lanka true? Scientific analysis suggests they are,” says text accompanying the promo.

Citing images from a Nasa satellite, the show claims that investigators have found a line of rocks 30 miles long between Sri Lanka and India.

The stones in the image are sitting on a ‘sandbar’, which occurs in areas with shallow water. As geologist Erin Argyilan explains, sand could accumulate between the land masses.

In fact, geologist Dr Alan Lester believes that the stones were brought from afar and set atop the sandbar island chain.

Adam’s Bridge, which many believe is the ‘Rama Setu’ built by a vaanar sena, links India’s Dhanushkodi which is thought to be the place where the Hindu god Rama ordered the construction of the bridge and Sri Lanka’s Mannar.

“These results suggest the structure in the satellite image isn’t natural, but built by humans. Some scholars believe the ancient text referred to a time 5,000 years. At this time in history, building such a bridge would have been a superhuman achievement,” the video explains.

“The rocks on top of the sand actually pre-date the sand. So there’s more to the story,” archeologist Chelsea Rose says in the video.

“There are stones that have been brought from afar and set on top of our sand bar island chain,” geologist Alan Lester says.

In 2007, Congress leader and then union minister of state, Kapil Sibal said that there is no scientific evidence to prove Rama Setu is man-made but argued that one should respect the faith people have.

The stretch of sand and rock between Tamil Nadu and Sri Lanka has a name: Adam’s Bridge.

And as an India Today report noted last year, “..no one really knows if this is the Ram Setu, but satellite pictures taken over time, and a recent image released by NASA have confirmed that the a stretch of land formation visible between Dhanushkodi and the Sri Lankan mainland is certainly man-made.”