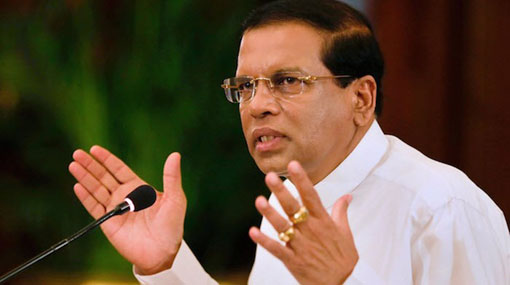 President Maithripala Sirisena will make a special statement to the media today on the final report of the Presidential Commission of Inquiry (PCoI) which investigated the Bond Issuance of the Central Bank of Sri Lanka.

He will make a special statement regarding the final reports of the Special Presidential Commission to inquire into the allegations of malpractices in the bond issue of the Central Bank of Sri Lanka and the Presidential Commission of Inquiry to investigate and inquire into Serious Acts of Fraud, Corruption and Abuse of Power, State Resources and Privileges (PRECIFAC), at 6.00 p.m. today (03).

The President will also speak on the implementation of the recommendations made by the Commissions, the President’s Media Division said.

The final report of the Commission was handed over to the President on 30th December.

The President appointed the Commission of Inquiry on 27th January to investigate, inquire into and report on the Issuance of Treasury Bonds during the period 1st February 2015 to 31st March, 2016.

The three-member Commission was headed by the Supreme Court Judge KK Chithrasiri. The two other members of the Commission were Justice P S Jayawardene and retired Deputy Auditor General, V Kandasamy.

The special statement will be telecasted on TV Derana and the Dialog TV channel Ada Derana 24X7.