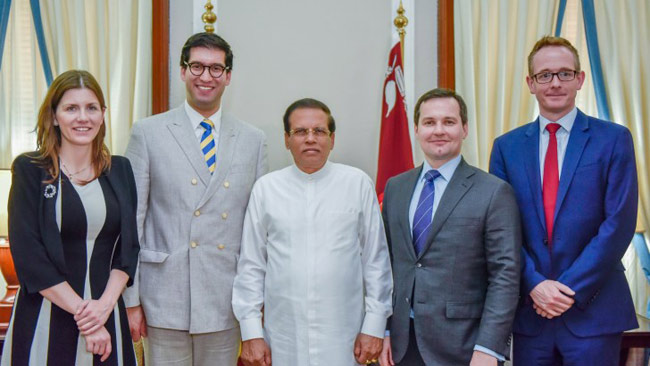 The UK All- Party Parliamentary Group on Sri Lanka met with President Maithripala Sirisena at the Presidential Secretariat.

Members of the All-Party Parliamentary Group including its Chair Mr Ranil Jayawardena of Sri Lankan origin, MP, House of Commons, who represent the Conservative Party of the UK, participated in this meeting on Thursday (4).

The delegation arrived in the country with the aim of strengthening the relations with Sri Lanka as a Commonwealth country as well as to promote trade and investment relations between the two countries, the President’s Media Division said.

The delegation also said to the President that there is immense progress in the programmes carried out by the Government during the past period to strengthen the democracy and the steps taken to develop the economy of the country, implementation of the special development projects as well as promotion of foreign trade.

President Sirisena pointed out the importance of further strengthening the relations between the two countries to reap maximum benefits from the opportunities of new technology and promotion of employment opportunities.

The Commonwealth Heads of Government Meeting is scheduled to take place in the United Kingdom in April this year, and the delegation said that in parallel to this event, the two countries are expected to further consolidate their ties.

The Secretary to the President Austin Fernando and Michelle Donelan, Chris Green and John Lamont representing the UK All- Party Parliamentary Group on Sri Lanka participated in this meeting.