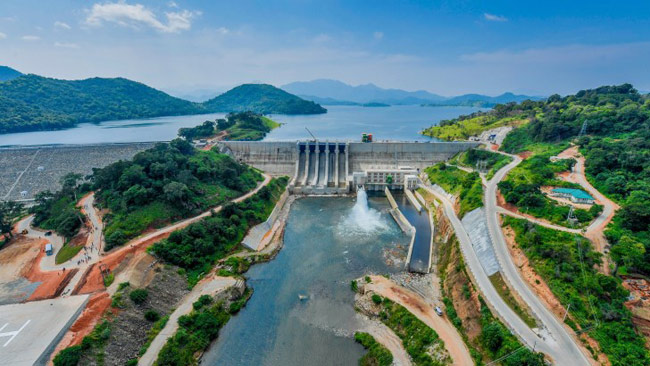 The waters of the last and biggest reservoir of the multipurpose Mahaweli Project at Moragahakanda opens its sluice gates today (January 8) to irrigate parched dry lands in faraway Vanni in the Northern Province on one side and Rajarata, Wayamba, Central and Eastern Provinces on the other.

Today also marks the 42nd anniversary of the commissioning of the first Mahaweli Project at Polgolla in the Central Province by the then Prime Minister Sirimavo Bandaranaike on January 8, 1976.

Mahaweli is the biggest multipurpose national project, which was implemented by different governments during the last four decades. The Project, first planned and feasibility studies done by the governments of Dudley Senanayake and S W R D Bandaranaike, was initiated by Mrs Bandaranaike in 1976 at Polgolla. However, bulk of the work was done during the J R Jayewardene period, during which the 30 year project was speeded up to be completed in five years under the able leadership of Minister Gamini Dissanayake.

Today, with the commissioning of Moragahakanda-Kalu Ganga reservoir of the Kalu Ganga Dam, an increase of 64,000,000 cubic metres of water will flow from the reservoir to far flung regions including, the Vanni, Matale, Anuradhapura, Trincomalee, and Polonnaruwa.

The Moragahakanda Dam is a high gravity dam with a height of 65 meters. The dam has created the Moragahakanda Reservoir, which has an active storage capacity of 521,000,000 cubic meters, and is four times bigger than the gigantic Parakrama Samudraya in Polonnaruwa.

Two additional embankment saddle dams have been built to contain the Moragahakanda Reservoir. The reservoir of the Kalu Ganga Dam has been linked via a tunnel.

Water from both, the Moragahakanda and Kalu Ganga reservoirs, will be primarily used to support agricultural needs in an area of at least 81,422 hectares. This would increase rice production by 81% or 109,000 tons, amounting to an estimated monetary benefit of US$1.67 million, annually.

In addition to the irrigation of land, water from the Moragahakanda Reservoir will be used to power the 25-megawatt Moragahakanda Hydroelectric Power Station.

Prior to Moragahakanda, all other projects under the Mahaweli have been completed.

They include: the Victoria Dam, located across the Mahaweli Ganga immediately upstream of the Victoria Falls rapids about 130 miles from the river mouth; the Randenigala Project, the fourth major multi-purpose project and the largest reservoir under the Accelerated Mahaweli Development Program; the Rantambe Dam and power station form the most downstream project of a cascade of reservoirs and hydro power stations on the Mahaweli Ganga in the Dumbara Valley; the Polgolla project, which carried water resources of the Mahaweli Ganga Basin; the Kotmale project, which is one of five major head works projects undertaken under the Accelerated Mahaweli Ganga scheme; and the Bowatenne Diversion Project, which lies in the northern part of the central highlands of Sri Lanka.

A major factor for the success of the Mahaweli Program was the ready response of several countries to finance the various construction works under the Project, the President’s Media Division said.

The Government of the United Kingdom financed the Victoria Project, Canada the Maduru Oya Project, Federal Republic of Germany the Randenigala Project and Sweden the Kotmale Project.

Initially, Japan was to fund the Moragahakanda Project. However, after the 1983 riots the project got delayed and finally on the request of the then Minister Maithripala Sirisena, China agreed to fund the project in 2007.

President Sirisena said, the implementation of the Moragahakanda-Kalu Ganga Irrigation Development Project is not only a fulfilment of a long awaited aspiration of the farmers, but also personally a dream come true for him.

He made these remarks during the national ceremony to enshrine treasures to build the main dam of the Moragahakanda-Kalu Ganga Irrigation Development Project in May 2016.