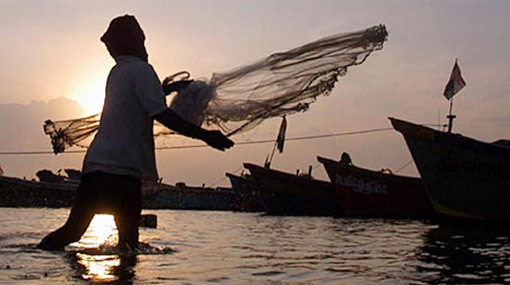 Over 4,000 Tamil Nadu fishermen were allegedly chased away by the Sri Lankan Navy which also snapped the fishing nets of 100 boats for fishing in their territorial waters off Katchatheevu islet, according to India media reports.

Fishermen from Rameswaram and Mandapam had ventured into sea on Saturday on 800 boats and were fishing near Katchatheevu islet when the Lankan Navy arrived and told them to leave, Rameswaram Fishermen Association President P Sesuraja said.

They also snapped fishing nets of 100 boats before chasing them away, he alleged and sought the Centre’s intervention in resolving the contentious fishermen issue. All the fishermen returned to the shore on Sunday morning. The mid-sea incident comes after a spate of detentions of the fishermen this month on charges of fishing in their territorial waters.

On January 4, as many as 13 fishermen from Thangachimadam near Rameswaram were arrested by the island nation authorities for allegedly fishing in their waters off Katchatheevu islet. Tamil Nadu Deputy Chief Minister O Panneerselvam met a team of fishermen in Rameswaram yesterday and assured them that the state government would take up with the Centre their grievances, including arrests by the Sri Lankan Navy.