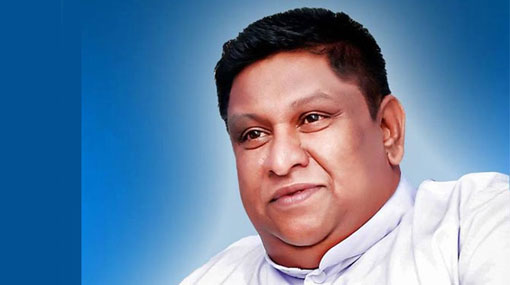 Uva Province Chief Minister Chamara Sampath Dassanayake has surrendered to police in connection with incident where he allegedly forced a female school principal to kneel at his feet.

Police spokesman SP Ruwan Gunasekara said that the chief minister surrendered to the Badulla Police Station through a lawyer this morning (23).

He is to be produced at the Badulla Magistrate’s Court today.

On January 20, the principal of a Tamil girls’ school in Badulla, who was allegedly summoned to the Uva Province Chief Minister’s house and made to kneel at his feet, finally broke her silence about the ordeal.

Addressing a gathering on January 9 in Bandarawela, JVP Uva Provincial Council member Samantha Vidyaratne had claimed that Chief Minister Chamara Sampath Dassanayake had summoned the principal of Tamil Girls’ Maha Vidyalaya, Badulla to his residence and made her kneel on the floor because she had refused to enroll a student recommended by him.

However, the Chief Minister had rejected the allegation while the matter had also caused a heated debate during the session of the Uva Provincial Council on January 12.

Meanwhile the female principal in question, speaking to the media immediately after the allegations had surfaced, denied that such an incident had occurred.

UNP Badulla District MP Vadivel Suresh visited the Tamil Girls’ Maha Vidyalaya in order to meet the principal last Sunday. During this visit, the female principal broke into tears and admitted that the CM had in fact made her kneel.

She stated that the reason last Friday she had denied to the media that it happened was due to the pressure exerted by the Chief Minister and the Secretary to the Provincial Education Ministry.

UNP Badulla District MP Chaminda Wijesiri and JVP provincial councilor Samantha Vidyaratne demanded that Dannayake be removed from the post of Chief Minister and be investigated.

On Monday (21), Dassanayake stepped down as the provincial Minister of Education pending the investigaiton.

The Sri Lanka Freedom Party (SLFP) has condemned the incident while President Maithripala Sirisena has instructed IGP Pujith Jayasundara to launch a comprehensive investigation into the allegations.