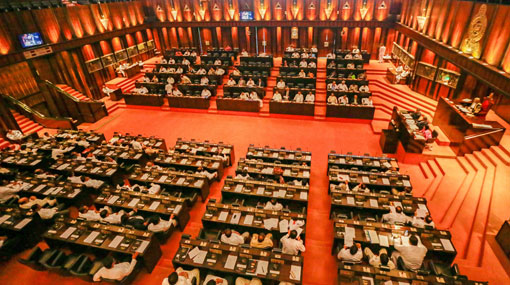 No-confidence motion against PM handed over to Speaker

The motion of no-confidence against Prime Minister Ranil Wickremesinghe has been handed over to the Speaker of Parliament by MPs representing the Joint Opposition.

Joint Opposition leader Dinesh Gunawardena handed over the motion to Speaker Karu Jayasuriya at 2.30pm today (21). Former President Mahinda Rajapaksa, who is also a signatory of the motion, was present on the occasion.

The motion has reportedly been signed by a total of 55 MPs including 51 from the Joint Opposition and 4 MPs from the Sri Lanka Freedom Party (SLFP).

The SLFP members who have signed include T.B. Ekanayake, Nishantha Muthuhettigama, Susantha Punchinilame and Kader Masthan.

The SLFP Parliamentary Group had said it would decide on the motion of no-confidence after discussing the points included after it is presented to the Parliament.

Meanwhile minister of the United National Party (UNP) have said that they would defeat the motion in Parliament.