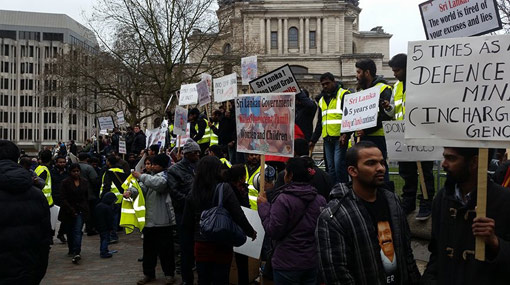 A group of LTTE supporters are reportedly protesting in front of the venue of the Commonwealth Heads of Government Meeting (CHOGM) in London, against the visit of Sri Lankan President Maithripala Sirisena.

The protest, organized by the Tamil Coordination Committee in Britain, is being held in front of the Marlborough House in Pall Mall, London.

The protesters held up placards and waved LTTE flags, while demanding President Sirisena to go back to Sri Lanka.

The President’s engagements include the Heads of Government meeting today (19) and the leaders’ retreat on April 20.