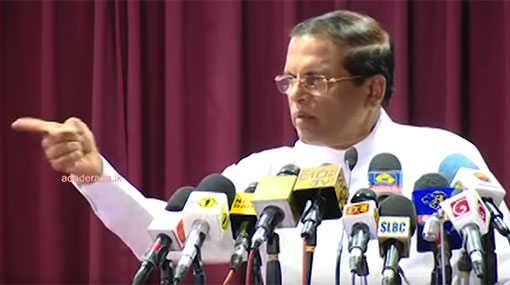 President Maithripala Sirisena says that he does not know who prepared the ‘100-Day Programme’ of the Good Governance government, which was unveiled after his election victory on January 8, 2015.

He made these controversial comments while delivering a strongly-worded speech during the commemoration event held at the Foundation Institute today (30) to mark the 76th birth anniversary of the late Most Ven. Maduluwawe Sobitha Thera.

The President stated that to this day he respects and he is content and grateful for the fact that he was chosen as the Common Candidate to face the last Presidential Election.

He said that even for that certain individuals are now saying that anyone would have gone on to win that election as the Common Candidate, if not him. “I was taken because there was no one else.”

The President stated that the 100-Day Programme which was published and unveiled after the election win contained a pledge for the 19th Amendment to the Constitution.

“In which Parliament in the history of the world can the Constitution be amended for the want of 47?” he questioned, referring to the number of UNP MPs in Parliament at the time.

He stated that the 100-Day Programme did not have the dissolution of Parliament in it.

“I do not know who made this. That was the stupidest thing done,” he said.

The President said that what should have been done was to dissolve Parliament immediately after he was sworn in.

He questioned whether the first Budget proposal of the government under the 100-day programme or the 19th Amendment to the Constitution could have been passed without the support of the Sri Lanka Freedom Party (SLFP).

“We were able to do those things because I took over the leadership of the Sri Lanka Freedom Party.”

Maithripala Sirisena also said that only he knows how many times he protected the country from unsuitable things, because SLFP Ministers were in the Cabinet.