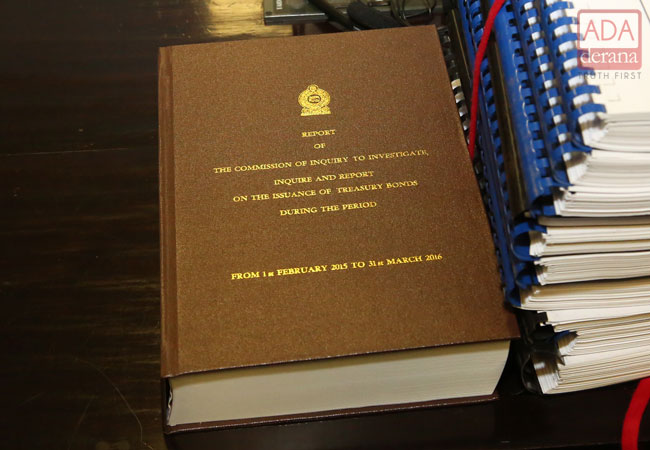 The Attorney General has informed the Secretary to the President that releasing section C350 of the Bond Commission report will not impact the ongoing investigations into the Central Bank treasury bond scam, the Presidential Secretariat said.

Section C 350 or the ‘Forensic Report on Communication Information Analysis’ - is said to contain detailed phone records collected by the CID of conversations between individuals connected to Perpetual Treasuries Limited including its owner Arjun Aloysius and politicians, journalists, religious leaders and civil society members.

President’s Secretary Austin Fernando had sought the advice of the Attorney General on releasing certain sections of the Bond Commission report which had not been released previously, based on several requests received by him from various parties.

Issuing a statement to the media on June 1, the President’s Secretary said that there have been repeated calls from various sections for the release of the names of 118 MPs who allegedly accepted money from Perpetual Treasuries Limited (PTL).

However, Fernando said that he does not know where the media or others who talks about it got their information as he is not aware if there are 118 such names.

He stated that MP Dayasiri Jayasekara has requested from him, under the Right to Information Act, for the CID investigations reports as well as all other documents and information mentioned in the Bond Commission’s report and not presented to the parliament.

However, he said that he cannot do so due to the advice given to him by the Attorney General and the Bribery Commission DG and that he cannot release those information without asking them.

Fernando said that he made a request to the Attorney General in writing seeking his advice on the matter.

On June 5, it was reported that sections C 350 to C 360 of the report of the Presidential Commission of Inquiry on the Central Bank bond scam, which had not been released previously, have been handed over to the Speaker of Parliament.