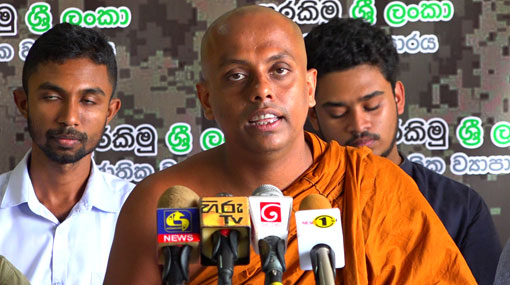 Sinharaja could lose World Heritage status if elephants are relocated?

UNESCO has notified Sri Lanka’s Department of Wildlife Conservation that the Sinharaja Forest Reserve will be at risk of losing its status as a World Heritage Site if the two wild elephants roaming the reserve are translocated, according to the ‘Protect Sri Lanka’ national movement.

Chairman of the movement, Pahiyangala Ananda Sagara Thero, speaking at a press conference held in Colombo on Wednesday (13), claimed that the UN’s cultural agency has informed the Director General of Wildlife Conservation Department of this via email.

The Thero said that Sinharaja is the only place remaining for the government, where the attention of the international community is being focused on, but the authorities are showing no interest towards safeguarding it.

He stated that the Minister of Wildlife has decided to translocate these two valuable elephants to the Horowpathana elephant protection centre and that if they follow through with that decision, the public will have to suffer the dangerous consequences.

Ven. Ananda Sagara Thero demanded that the government properly discuss this issue and take a decision after consulting experts.

He also said that he is disappointed by the decisions which have been taken with regard to the Sinharaja forest reserve and the two remaining elephants.

Environmental conservationists, who also participated in the press briefing, said that if the two elephants attack and kill any humans after they are transferred to Horowpathana, legal action will be taken against the government for causing such a situation.

Therefore they requested that the President and Prime Minister take a decision on this matter together.