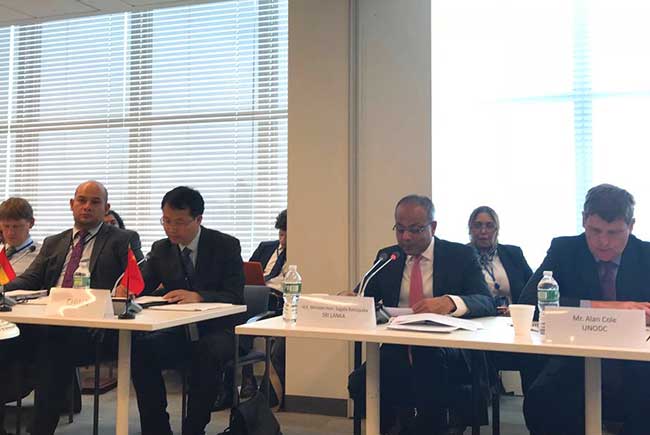 Project Management, Youth Affairs and Southern Development Minister and Prime Minister’s Chief of Staff Sagala Ratnayaka said Sri Lanka, especially with its strategic location in the Indian Ocean,  was the perfect location to run a global programme on maritime crime.

Addressing United Nations Security Council Open Arria Formula meeting on ‘Maritime Crime as a Threat to International Peace and Security’, Ratnayaka said the Sri Lankan government was   delighted with the decision of the Global Maritime Crime Programme of UNODC to relocate the Head of the Programme and his expert team to Sri Lanka, to run global programming across the Indian Ocean, Atlantic Ocean, Pacific Ocean, Mediterranean and Caribbean from offices in Colombo.

“The ‘Colombo Declaration’ and the Southern Route Partnership were identified as the primary mechanisms to counter narcotics trafficking in the Indian Ocean, at the Ministerial Meeting of the Indian Ocean Commission (IOC) in April 2018.  Sri Lanka remains committed to the “Colombo Declaration” and will continue to provide political and regional support in international fora, as I am doing today” Ratnayaka said, addressing the high-profile UN meeting.

Ratnayaka said the Sri Lanka Police Narcotics Bureau with the support of Sri Lanka Customs seized over 1,700kg of Cocaine in major seizures in 2016 and 2017.

“This included a seizure of 928kg of Cocaine from an Indian bound merchant vessel, MV Fabiola when it docked at the Colombo Port on 9 December 2016.  This haul is the largest Cocaine seizure recorded in South Asia with an estimated street value of Sri Lankan Rupees 12 billion, around USD 77 million.  In April 2016, the Police Narcotics Bureau and Sri Lanka Navy in a Joint Maritime Operation seized 101kg of Heroin on a dhow off the Southern coast of Sri Lanka,” he explained.

“There have been reports that drug dhows have travelled eastwards towards Sri Lanka and the Maldives, as recently as February 2018, and due to legal and jurisdictional inhibitions, sharing of such information with affected States was constrained.  Just two weeks ago, on 31 May 2018, a dhow ran aground off Innafinolhu Island in the northern part of the Maldivian archipelago, laden with115kgs of drugs,” the Minister also added.

“We are experiencing a massive explosion of drug trafficking by maritime routes. The use of the Indian Ocean as a major drug trafficking highway – particularly for Heroin originating in Afghanistan – poses a maritime security and a maritime law enforcement challenge,” Ratnayaka said adding that one of the major challenges is the lack of a ‘legal finish’ (such as prosecution) for the majority of drug seizures made within international waters in the Indian Ocean region.