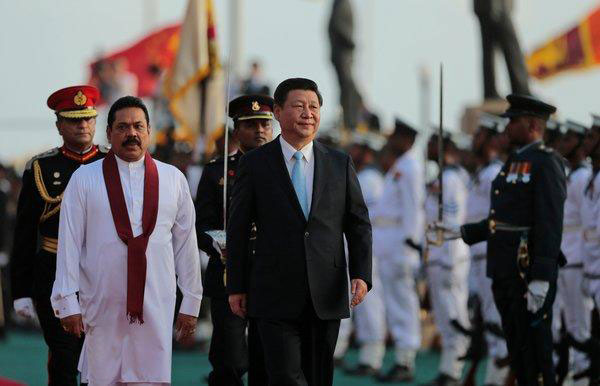 How China got Sri Lanka to cough up Hambantota Port - Report

China’s acquisition of the strategic Hambantota port from Sri Lanka has given it “control of a territory” just a few 100 miles off the shores of India, highlighting its “debt trap” and ambitious use of loans to gain influence around the world, a media report has said.

An investigation by New York Times about Sri Lanka’s handover of the Hambantota Port to China in December 2017 illustrates how China turned an ally’s struggles to its strategic advantage. The report says feasibility studies had found that the port would not work and “frequent lenders” like India had refused to provide loans or assistance for the port, developed during Sri Lanka’s president Mahinda Rajapaksa’s rule. “However, every time Rajapaksa turned to his Chinese allies for loans and assistance with the ambitious port project, the answer was yes,” it says.

Over years of construction and renegotiation with China Harbor Engineering Company, one of Beijing’s largest state-owned enterprises, the Hambantota Port Development Project distinguished itself mostly by failing, as predicted, it says. At a time when tens of thousands of ships were passing by along one of the world’s busiest shipping lanes, the port drew only 34 ships in 2012, it said.

With Rajapaksa — whose campaign aides received direct payments from the Chinese port construction fund — being voted out of office in 2015, the new government struggled to make payments on the debt he had taken on for the port development. “Under heavy pressure... the government handed over the port and 15,000 acres of land around it for 99 years in December last year,” it says.

“The case is one of the most vivid examples of China’s ambitious use of loans and aid to gain influence around the world — and of its willingness to play hardball to collect,” the report said.

The debt deal which led Lanka to hand over a strategic port to China also put focus on some of the “harshest accusations” about President Xi’s signature OBOR drive: that the global programme amounts to a debt trap for vulnerable countries around the world, fueling corruption and autocratic behaviour in struggling democracies

The New York Times said that months of interviews with Sri Lankan, Indian, Chinese and Western officials and analysis of documents and agreements stemming from the port project present a stark illustration of how China and the companies under its control ensured their interests in a small country hungry for financing.

The report claims that during the 2015 Sri Lankan elections, “large payments” from the Chinese port construction fund flowed directly to campaign aides and activities for Mr. Rajapaksa, who had agreed to Chinese terms at every turn and was seen as an important ally in China’s efforts to tilt influence away from India in South Asia. The payments were confirmed by documents and cash checks detailed in a government investigation seen by The New York Times.

“As the January election inched closer, large payments started to flow toward the president’s circle.”

“At least $7.6 million was dispensed from China Harbor’s account at Standard Chartered Bank to affiliates of Mr. Rajapaksa’s campaign, according to a document, seen by The Times, from an active internal government investigation. The document details China Harbor’s bank account number — ownership of which was verified — and intelligence gleaned from questioning of the people to whom the checks were made out.”

“With 10 days to go before polls opened, around $3.7 million was distributed in checks: $678,000 to print campaign T-shirts and other promotional material and $297,000 to buy supporters gifts, including women’s saris. Another $38,000 was paid to a popular Buddhist monk who was supporting Mr. Rajapaksa’s electoral bid, while two checks totaling $1.7 million were delivered by volunteers to Temple Trees, his official residence.”

“Most of the payments were from a subaccount controlled by China Harbor, named ‘HPDP Phase 2,’ shorthand for Hambantota Port Development Project,” according to the The New York Times article.