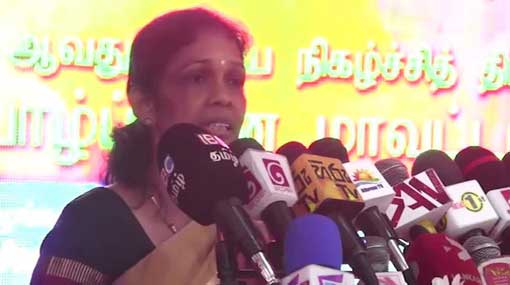 An investigation is being carried out regarding certain controversial comments made by the State Minister regarding the now defunct LTTE, during an event in Jaffna yesterday

Several MPs from both sides today requested the Speaker of Parliament to relieve State Maheswaran from her post as an MP.

Speaker Karu Jayasuriya informed Parliament that an inquiry will be carried out with regard to the statement and an appropriate decision will be taken afterwards.

Joint Opposition members charged that Maheswaran has no right to continue to represent the Parliament as she has committed the grave crimes of promoting terrorism and violating the Constitution.

Leader of the House, Lakshman Kiriella, also stated that the United National Party (UNP) will be conducting a disciplinary inquiry regarding the State Minister’s speech.

The Speaker has informed the Attorney General to investigate whether State Minister Vijayakala Maheswaran’s controversial statement has violated the Constitution or any laws and to take necessary legal action.

Speaking during a state event held in Jaffna yesterday (2), Maheswaran had said that the LTTE should be resurrected for the freedom of the Tamil people.

If Tamil people want to live freely, the LTTE should raise their hand again, she had reportedly said.