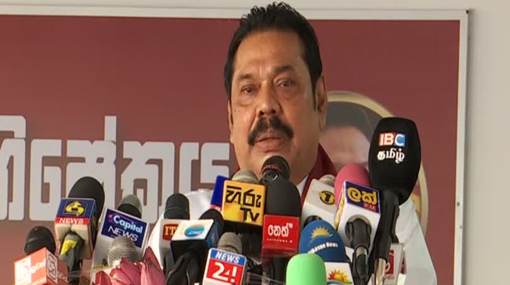 Legal action not to suppress media, but to correct them - Mahinda

Former President Mahinda Rajapaksa says that the campaign to ‘sling mud’ at him has begun and that even foreign countries are now being used to tarnish his reputation.

“Now the campaign to sling mud at us has commenced. They are catching me for everything,” he said, adding that someone had even claimed that he was behind State Minister Vijayakala Maheswara’s statement.

The former President said that some people are asking him why he is not suing The New York Times over the article which had accused his government of corruption, and that his response is that he does not have a vote in America and he is not going to contest any election in America.

However, he said that they have already handed over to initiate legal action a certain organization in Sri Lanka for unnecessarily distorting and publishing the said article.

“That is not to suppress the media. It is to correct them,” he stressed.

He also urged the members of the Sri Lanka Podujana Peramuna (SLPP) to prepare to “play the second innings” which he says will be the “winning innings.”

Rajapaksa expressed pleasure for inviting Gotabaya Rajapaksa and his acceptance of the invitation.

“There is no Viyath Mawatha. It is only a word for a programme,” he stated, adding that they are both taking forward the ‘Mahinda Chinthanaya’.

Former Defence Secretary Gotabaya Rajapaksa, speaking to reporters after the event, said that ‘Viyath Maga’ should be considered as place to pool together resources for any government that comes to power in the future.

He said that what they are doing with Viyath Maga is gather scholars who will be good resources for the next government.

Responding to another question from reporters, he said: “The Rajapaksas are a group that always sticks together. We don’t have divisions like others.”