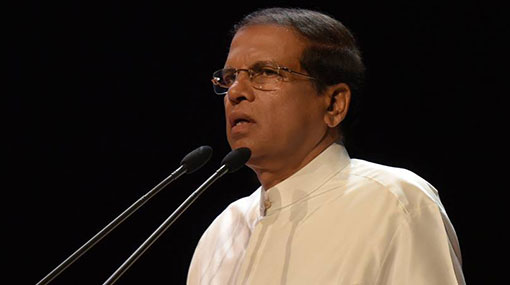 President Maithripala Sirisena says he made an intervention with a commitment to provide solutions for the issues arising regarding the South Asian Institute of Technology and Medicine (SAITM), with the aim of not leaving any room for any child of this country to be subject to injustice in receiving the education.

He made these remarks participating in a meeting with the students of the SAITM and their parents, held at the Nelum Pokuna Theatre on Friday (06).

Even though various political paws behind this issue attempted to gain political advantages, the present government was able to provide solutions for this issue while paying proper attention to the future of all the children.

President Sirisena further said that if he didn’t consider about the future of the students studying at the SAITM, there was ability for him to shut down the institute in 2015 and get rid of this matter. He also said that he tried to provide a solution for this issue during the past three years consulting all the relevant parties amidst the allegations, humiliations and protests for the sake of the future of these children.

The President said that in a similar manner the government strengthen the free education of the country by providing the required human and physical resources, it has accepted as a policy to strengthen the non-government education institutions too, while paying the attention to the quality and standard of those institutions.

President Sirisena expressing his views regarding the education process of the SAITM students who were enrolled to the Kotelawala Defence University (KDU) medical faculty said that the necessary steps will be taken in the near future to uplift the necessary facilities of the KDU medical faculty.