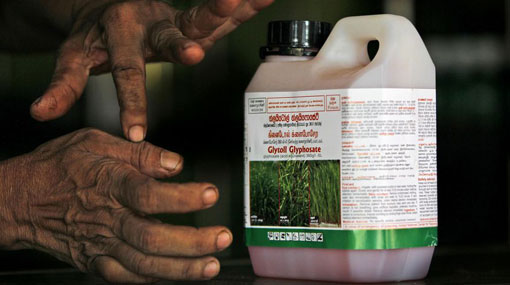 The landmark ruling given by a jury in the United States, that a glyphosate-based weed killer was the cause for a groundskeeper’s cancer, could probably bolster the prospects of the Sri Lankans seeking justice due to the affects of the disputed agrochemical.

In the first lawsuit to go to trial alleging a glyphosate link to cancer Chemical giant Monsanto has been ordered to pay $289 million in damages to a man who claimed the herbicides containing glyphosate had caused his cancer.

Dewayne Johnson (46), a former school groundskeeper, won a huge victory in the landmark case on Friday with the jury determining that Monsanto’s Roundup weed killer caused Johnson’s cancer and that the corporation failed to warn him of the health hazards from exposure.

Ada Derana spoke to Dr Channa Jayasumana, a leading academic who has done extensive research into the kidney disease in Sri Lanka, regarding the verdict in the case and its implications to Sri Lanka, where glyphosate has been linked with the spread of chronic kidney disease in the country.

He stated that prior to this he had also testified before a court in the Netherlands during a trial regarding the pesticide and that yesterday’s ruling by the San Francisco County Superior Court found glyphosate as cancer causing.

Dr Jayasumana, the head of the Department of Pharmacology at the Rajarata University, said that with this ruling they ensure that the people affected by the agrochemical in Sri Lanka get some form of justice through legal action.