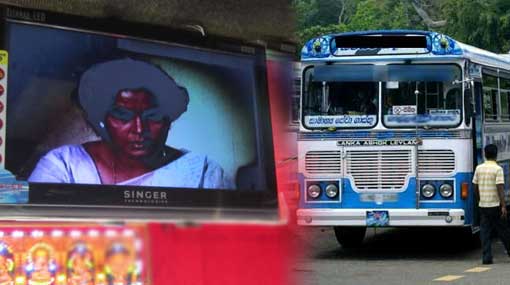 The decision taken by the Road Passenger Transport Authority (RPTA) of Eastern Province to ban televisions in buses has received praise from the Colombo District Bus Passengers Association (CDBPA).

Eastern province RPTA has taken this decision taking into consideration that the TVs in the buses divert the attention of the drivers and certain scenes that are telecast could make commuters uncomfortable.

TVs had been set up in buses under a project which was launched in 2010 by the National Transport Commission (NTC) to provide information and entertainment for the commuters. However it has failed to meet the expected results, says the CDBPA.

However, this decision taken by this Eastern Provincial RPTA to ban TVs in buses should be broadened, and RPTPAs of other provinces including Western province should also heed to implement this ban, says the CDBPA.

It further stated that plans are underway to conduct discussions with the NTC and the Transport Ministry pertaining to this issue.