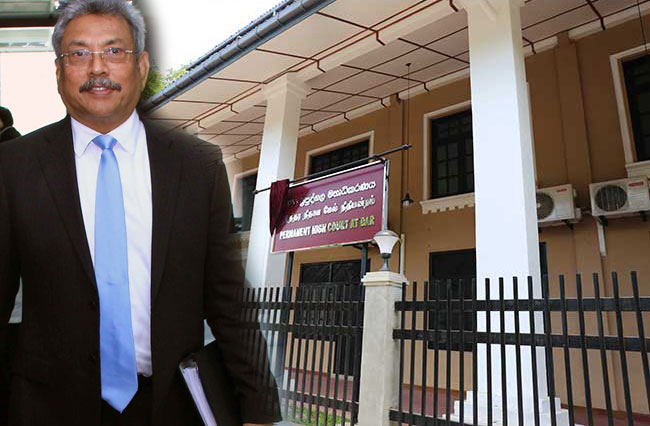 Case filed with Special High Court against Gotabaya & 6 others

The Attorney General’s Department today filed a case with the newly set-up Permanent High Court at Bar against former Defence Secretary Gotabaya Rajapaksa and 6 others, over the misappropriation of state funds when building the D.A. Rajapaksa Museum.

The Attorney General’s Department filed the indictments today based on the investigation carried out by the Police Financial Crimes Investigation Division (FCID).

The seven defendants named in the case including the former Defence Secretary are changed over the misuse of state funds amounting to Rs 49 million when constructing the D.A. Rajapaksa Museum and Memorial in Medamulana.

This is the second case filed with the Permanent High Court at Bar, which was recently declared open at the Hulftsdorp Court Complex.

The Colombo Chief Magistrate yesterday recalled the order on Gotabaya Rajapaksa and 6 others charged with the alleged misuse of public funds during the construction of the Museum.

The new court set up to investigate major corruption began its work by hearing the case against Rajapakse’s top aide Gamini Senarath and three others accused of siphoning off 500 million rupees.

The four took the money during the construction of a hotel in the capital Colombo that was meant to be managed by the Hyatt group, prosecutors said.