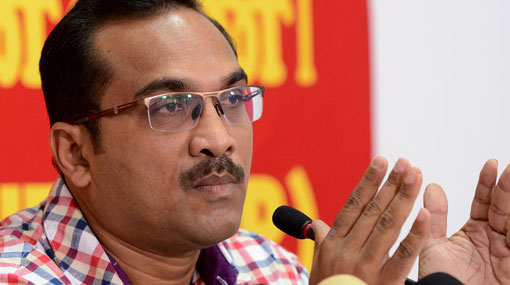 The Janatha Vimukthi Peramuna (JVP) says it believes that the LTTE will not raise its head once again in the country, and that a separation of any kind will not take place in Northern and Eastern areas, under any circumstances.

JVP Parliamentarian Bimal Rathnayake stated this last evening (29) joining a public meeting in Dambulla, which was held under the series of public meetings themed “Rata Hadana, Rata Rakina Balavegaya” organized by the JVP.

Fabricated racism is being spread in the country, however a civil war would not be allowed to break out again, since the country has strong tri-forces, he stressed.

Neither the UNP nor SLFP have been able to develop the country, and the JVP has failed to gain public trust although the party has proved to be void of frauds, corruptions and receiving salaries, he further mentioned.

Hence, the JVP is in progress of educating people to gain public votes to build up the country.

Further commenting, MP Bimal Rathnayake claimed that the President is wasting public funds by holding many functions island-wide, and under the Right to Information Act, expenses for the functions held to declare open the Moragahakanda Reservoir will soon be revealed to the public.

A document comprising 10 policies to build up the country is currently underway by a group of scholars, MP Bimal Rathnayake stated.