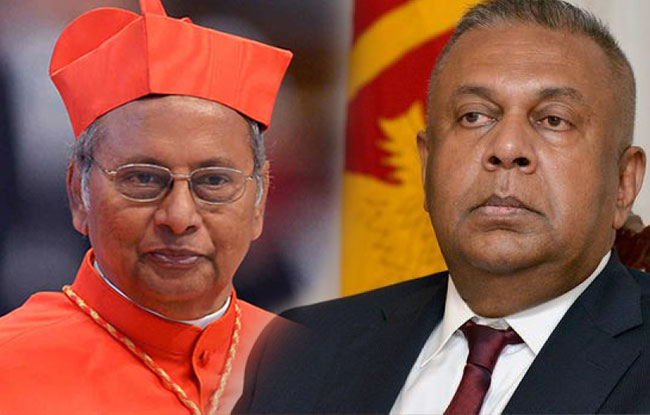 Minister of Finance and Mass Media Mangala Samaraweera has criticized certain controversial comments made by the Archbishop of Colombo, Cardinal Malcolm Ranjith, regarding human rights while accusing the latter of always getting things wrong in “trying to be a populist”.

Speaking recently during a morning service at a church in Ekala, Cardinal Malcolm Ranjith had allegedly said that human rights had become the latest religion among those in Western nations.

“Human rights was found recently. If we can live in a correct manner there is no need for human rights. Those who do not practice religion are the ones who hang on human rights,” he was quoted as saying in a local media report.

However, tweeting a response to this news report, minister Samaraweera said:

“The need for Human Rights was an outcome of the marauding religious zealots of the Inquisition & the Crusades, where non believers were massacred “En-Bloc”. Pity, the Cardinal always seems to get things wrong in trying to be a populist.”

Prominent human rights lawyer President’s Counsel Saliya Pieris, who is the Chairman of the Office on Missing Person (OMP), also hit out at the Archbishop’s statement accusing the latter of downplaying the importance of human rights and being ignorant of its concepts.

“If this report is accurate it is a shame the way the Cardinal downplays the importance of human rights. He seems to be absolutely ignorant of the concepts of human rights,” he said in a Facebook post.

“He also fails to understand that there are many people who don’t believe in religion and that religion cannot be forced on people. What a contrast to the progressive thinking of Pope Francis. If it is inaccurate he must deny this.”