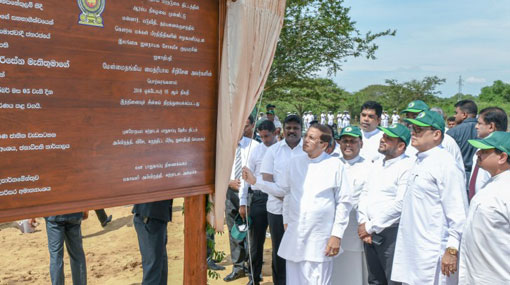 President Maithripala Sirisena says that he had not taken many high positions entrenched with money and power and selected the Ministry of Environment to ensure the right to life of all the creatures including the human beings.

Even though the previous Presidents had taken the Ministry of Finance under their purview as soon as they came to power, President Sirisena pointed out that he had taken steps to shed excessive powers of the Executive Presidency and devolved them to the Parliament.

The President made these remarks addressing the National Environmental Conference held at the Mannar Urban Council Ground, today (05), the President’s Media Division reported.

The President emphasized the importance of protecting the environment as a child, which ensure the right to life of the human beings and further said that no one will be allowed to destroy the environment.

The President said that all the public servants in a respective district will be liable for the environmental damage occur in that particular district and further requested to inform him if there is any political influence when enforcing the laws against environmental damage.

Today, Sri Lanka has adopted all the international conventions implemented to protect the environment, and important programmes have been implemented to achieve the sustainable development goals.

The President said that this kind of environment conferences are being held covering all the districts to solve the environmental issues at the district level and further emphasized the need of fulfilling respective duties by everyone in this regard.

The National Environmental Conference commenced after every person taking the environment pledge and the President initiated the programme to distribute saplings among the school children.

Meanwhile the inaugural ceremony of the National Ruk Ropana Day 2018 proceeded under the patronage of President Maithripala Sirisena at Thampanakulam, Madupara, Mannar today (5).

The objective of this program is to increase the forest cover of Sri Lanka to 32% and to take forward the country towards a blue green era, the statement said.