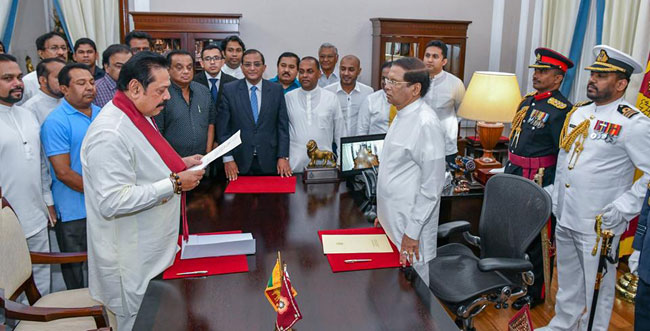 Former President Mahinda Rajapaksa has been appointed as the Prime Minister of the Democratic Socialist Republic of Sri Lanka and was sworn in before President Maithripala Sirisena today (26) at the Presidential Secretariat.

Ada Derana has received video footage of the swearing in ceremony at the Presidential Secretariat in Colombo, recorded from mobile phones of the politicians present.

The videos show the former President Mahinda Rajapaksa taking oath as the Prime Minister of Sri Lanka before President Maithripala Sirisena and surrounded by MPs from the Joint Opposition and Ministers and MPs of the SLFP.

The SLFP MPs who recently left the government were also present for the ceremony.

The unexpected announcement comes just minutes after the United People’s Freedom Alliance (UPFA) decided to withdraw from the unity government.

UPFA General Secretary Mahinda Amaraweera, speaking to Ada Derana, stated that the Speaker of Parliament has been notified of the decision in writing.

The decision was taken during the UPFA Working Committee meeting held today (26). Amaraweera was also present at the swearing in ceremony of the new Prime Minister.

The coalition had grown increasingly strained in recent months. Both coalition partners suffered heavy defeats in local elections in February, and Sirisena loyalists backed a no-confidence motion in April against the prime minister, who survived after a majority of legislators voted to support his coalition government.