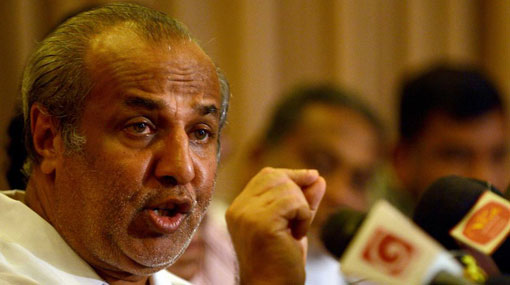 Leader of the Sri Lanka Muslim Congress (SLMC) MP Rauff hakeem says that today was one of the darkest days in the parliamentary history of the country.

Speaking at a press conference with other leaders of the United National Front (UNF) at the parliament complex today (16), he said that MPs of the government were responsible for the acts of thuggery, intimidation and attacks on opposition MPs, the Speaker and police officers.

He stated that they occupied the seat of the Speaker by force and disrupted proceedings and that they prevented the Speaker from ascending his chair due to the fact that one government MP was occupying it.

He said that the MPs of the so called government were all out to prevent the proceeding today knowing that they have the majority and were attempted to prevent the vote on the new no-confidence motion.

He stated that the entire world witnessed what is happening in the Parliament of Sri Lanka and that everyone clearly saw government MPs attacking the chair, the Speaker and the police protecting him.

Hakeem asserted that a ‘proper’ no-confidence motion against the Prime Minister and government was passed in the Parliament today by voice and that this will be brought to the notice of the President.

It is up to the President to take the necessary constitutional steps that follow, he said.

The former Minister said that as per the Constitution, once the no-confidence motion against the government has been passed that government ceases to exist.

“Therefore the purported government of Mahinda Rajapaksa has ceased to exist”, he said.

He said that they request the President to honor the House’s decision as had been displayed today.

He added that despite the continuous obstructions from the government MPs, they carried a no-confidence motion as requested by the President.

Hakeem said that they are expecting the President to appoint a Prime Minister and Cabinet to fill the void.