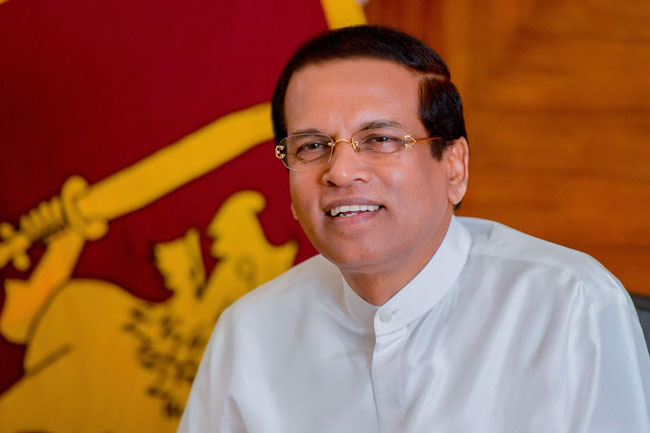 I will never appoint Ranil as PM again  President

Mr Wickremesinghe’s party has a majority in parliament and Mr Sirisena’s bid to replace him with the country’s former strongman Mahinda Rajapakse has already failed.

But Mr Sirisena choked back tears in a meeting with foreign correspondents as he accused Mr Wickremesinghe, who he sacked on Oct 26, of being “highly corrupt”.

“Even if the UNP has the majority I told them not to bring Ranil Wickremesinghe before me, I will not make him prime minister,” he said, referring to Mr Wickremesinghe’s United National Party.

“Not in my lifetime,” he added in comments that the UNP said showed the president uses Sri Lanka like his own “private coconut estate”.

Mr Sirisena dismissed Mr Wickremesinghe following a host of personality and political clashes since they formed a coalition in 2015.

He named Mr Rajapakse as new premier and tried to dissolve parliament but the Supreme Court and legislators blocked the moves.

Mr Wickremesinghe, who continues to occupy the prime minister’s residence, and Mr Rajapakse, who has the premier’s official offices, have both refused to back down.

That has left the country officially without a prime minister, heightening international fears about Sri Lanka’s stability and looming foreign debt repayments.

Sirisena said at his official residence that he will appoint a commission to investigate corruption under Wickremesinghe since January 2015.

“He is corrupt. His economic policies are not good for local industries. He pursued an extremely liberal form of government that is not compatible with our culture.”

Mr Wickremesinghe’s UNP hit back at the former ally.

“He can choose any superintendent for his private coconut estate, but in government he must recognise the leader of the largest single party in parliament,” UNP spokesman Harsha de Silva told AFP.

Mr De Silva said the UNP welcomed any corruption investigation, but insisted that existing inquiries into high profile murders and corruption under Rajapakse should be pursued with vigour.

Close family and associates of Mr Rajapakse face allegations of murder and siphoning off millions of dollars of public money.

Mr Sirisena almost lost his voice as he recalled how he asked Wickremesinghe to step down in February when their respective parties were beaten in local elections.

“I told him that we lost the election because his economic policies had failed. I told Ranil in this very room to step down, but he refused,” Mr Sirisena said.

He added that there had been “hundreds” of clashes between the two that had become an open secret in the coalition government.

Sri Lanka’s parliament meets on November 27 and 29 to discuss a motion by the UNP to cut off government spending.

Government finances will stall on January 1 unless a 2019 budget is passed.

If the UNP wins the vote, it could force Rajapakse to withdraw his claim to the leadership, and compel Sirisena to name a prime minister from the UNP.

“If the UNP shows a majority, I believe Mahinda will do the right thing (and stand down),” said Mr Sirisena, although he reiterated that he would still not reappoint Mr Wickremesinghe.

Asked if he could constitutionally ignore the leader of the largest party in parliament, Sirisena said he would rely on tradition.

“There is a tradition that the person appointed PM should be able to work with the president. I cannot work with Ranil. The UNP will have to bring somebody else.”