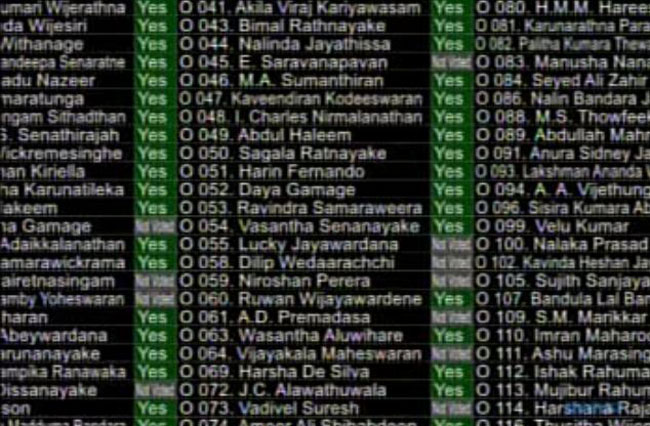 The motion to suspend the expenditures of the Prime Minister’s Office was passed in Parliament with 123 votes as the government MPs were absent during the vote due to boycotting today’s session.

The motion to suspend was presented to the Parliament by UNP MP Ravi Karunanayake this morning (29)  and was seconded by UNP MP Navin Dissanayake.

The motion states that the Secretary to the Prime Minister has no authority to approve any expenditure drawn from the funds of the Republic.

The motion further reads: “Whereas this House on 16th November, 2018, accepted the official statement made by the Hon. Speaker on 15th November, 2018 that, in terms of paragraph 2 of the No Confidence Motion against the Government adopted on 14th November 2018, the Cabinet of Ministers stood dissolved in terms of Article 48 of the Constitution, and accordingly this House further resolved that, since 26th October, 2018, as contemplated in Article 48 of the Constitution, this House had no confidence in the Government including Hon. Mahinda Rajapaksa.”

“And whereas Parliament has full control over Public Finance as mandated in Article 148 of the Constitution.”

“Accordingly, that this Parliament resolves that from 15th November, 2018 the Secretary to the Prime Minister has no authority to approve any expenditure drawn from the funds of the Republic, and any person taking any action in violation of this Resolution will be dealt with according to law.”

MPs of the United National Front (UNF), Tamil National Alliance (TNA) and the Janatha Vimukthi Peramuna (JVP) voted in favour of the motion which was passed by 123 to none.

Legislators of the government side were absent during the vote as they boycotted parliament proceedings for the third day.

The motion was aimed at preventing Mahinda Rajapaksa from using government money for his day-to-day expenses as prime minister.