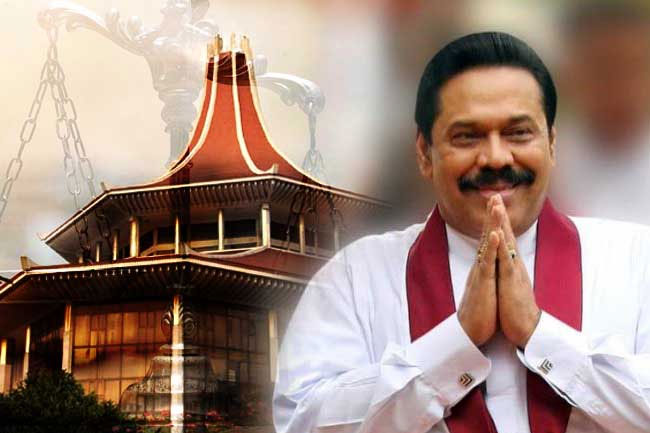 The Court of Appeal today issued an interim injunction order restraining Prime Minister Mahinda Rajapaksa and his Cabinet from functioning until the hearing of the Writ of Quo Warranto filed against them holding office is concluded.

The court fixed dates from December 12 to proceed with the hearing of the petition while notice was also issued on the 49-member Cabinet including Prime Minister Rajapaksa to appear before the court on that date.

Accordingly, the court granted leave to proceed with the Quo Warranto petition and issued notice on the respondents to appear before the court and give testimonies.

The court said that the interim order will be in effect until the hearing of the petition concludes.

The judge issued the stay order on Monday, saying “irreparable damage would be caused” if Rajapaksa and ministers of his cabinet continued to hold office.

While the decision would leave Sri Lanka without a government, allowing a “set of persons who are not entitled in law to function as the prime minister or the cabinet of ministers or any other minister of government” would cause irremediable damage that poses far-reaching consequences to the whole country, the judge said.

The Court of Appeal will sit again on December 12 to deliver a verdict, he added.

The Appeals Court today concluded the consideration of the Writ of Quo Warranto which filed by 122 Members of Parliament including members of the UNF, TNA, JVP, SLMC and ACMC.

Consideration of the Writ of Quo Warranto resumed before the Court of Appeal for the second day this morning while the court’s decision whether to grant leave to proceed with the petition or not was to be announced at 3.00 p.m. today (Dec. 3).

The application was also taken up for consideration on November 30 while Rajapaksa’s lawyers had requested the Appeals Court to dismiss the Writ of Quo Warranto on that day.

Parliamentarians who filed the Quo Warranto petition say that Prime Minister Mahinda Rajapaksa has no parliamentary majority and the speaker too has confirmed this.

As a result, the petitioners claim that Mahinda Rajapaksa is not legally entitled to hold office of Prime Minister under the 19th Amendment of the Constitution.

Hence, the petitioners have appealed to the Court of Appeal to nullify the appointment of Mahinda Rajapaksa as the Prime Minister and the Cabinet ministers, as per the provisions of the Constitution.

The petitioners have been named Prime Minister Mahinda Rajapaksa and 48 others as respondents of the case.