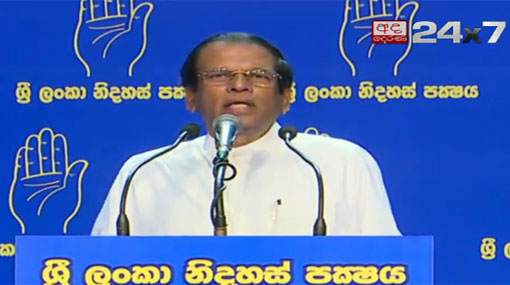 President vows to resolve political crisis within a week

President Maithripala Sirisena today assured that the prevailing political unrest in the country would come to an end within one week.

He said this while delivering a special statement, while addressing the convention of the Sri Lanka Freedom Party (SLFP).

The SLFP convention is currently underway at the Sugathadasa Indoor Stadium in Colombo, with the participation of parliamentarian, members of the party and special invited guests.

Addressing the gathering, he said that there is no ‘political clash’ in the country, however there is ‘political crisis’ which has resulted in unrest.

He stated that the decision he took on 21 November 2014, to quit the then government and contest the presidential polls as the common candidate, is more correct today than it was that day.

He said that similarly the decision taken by him on October 26 this year, to sack Ranil Wickresinghe as Prime Minister and form a new government, was also a correct decision taken on behalf of the country.

The President accused the UNP leader of ‘violating’ and ‘murdering’ the concept of good governance and that he stood by patiently for 3 years.

“Ranil Wickremesinghe destroyed the country and the United National Party. To some extent he also destroyed me,” the President charged.

Sirisena said that he decided that the only solution to this problem was to sack Wickremesinghe from the premiership.

He also accused the UNP leader of deceiving the people of the North.

The President also condemned the recent behavior of the country’s MPs within the Parliament regardless of party differences.

He further said that he always respects the judiciary and that he respectfully accepts the decisions and verdicts given by the judiciary.

However, he said that the people’s opinion on the country’s judiciary differs.

The President claimed that UNP leader Ranil Wickremesinghe is ‘worshipping’ the foreign embassies in Sri Lanka in order to get back the seat he lost, but that they only ‘worship’ the people.

President Sirisena reiterated that he will never reappoint Ranil Wickremesinghe as the Prime Minister of Sri Lanka.

“I will never make Ranil Wickremesinghe the Prime Minister again even if all 225 in parliament sign and request me to do so,” he said.

Explaining the reasoning behind his stance, the President said that he has no personal dispute with the UNP leader and that he is doing that because Wickremesinghe is “a politician who is unsuitable for the country.”

Sirisena alleged that Wickremesinghe’s vision and ‘the way he thinks’ does not suit the country.

The President stated that he is aware that the UNP supporters who voted for him hate him right now.

Maithripala Sirisena said that he guarantees that the prevailing political crisis and unrest in the country will come to an end within a week.

“I didn’t create the problem. The problem was created by Ranil Wickremesinghe,” he added.