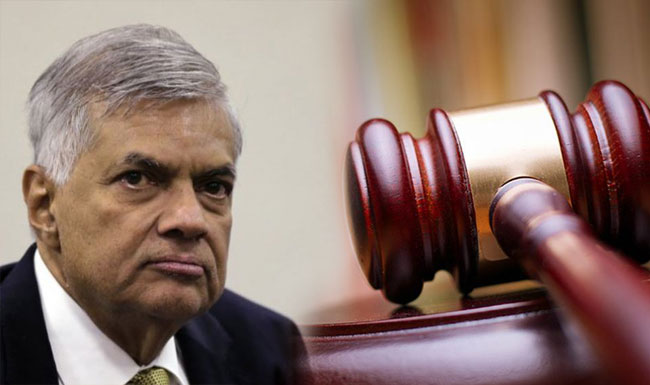 A petition has been filed with the Court of Appeal requesting the court to issue a Writ of Quo Warranto preventing Ranil Wickremesinghe from being a Member of Parliament.

The petition has been filed by Sharmila Gonawala, the Co-President of ‘Women for Justice’.

Leader of the United National Party (UNP) Ranil Wickremesinghe, UNP General Secretary Akila Viraj Kariyawasam and the Secretary General of Parliament are among the four respondents named in the petition.

The petitioner states that according to the provisions of the Constitution, it has been interpreted that MPs who engage in businesses by entering into contracts with state institutions are deemed disqualified from holding a set in Parliament.

She further states that she has received information that MP Ranil Wickremesinghe is a shareholder of Lake House group and that Lake House Printers and Publishers PLC, a company in that group, is engaged in the business of printing of check leaves for the state-owned Bank of Ceylon and People’s Bank.

The petitioner hence argues that by doing business after entering into contracts with Bank of Ceylon and People’s Bank, as a shareholder of Lake House, Ranil Wickremesinghe has become ineligible to hold a seat in parliament.

She states that as per Constitutional provisions, under this condition Wickremesinghe is not qualified to hold office as a Member of Parliament (MP).

The petition also refers to a similar petition which had been filed by the then deputy minister Dilan Perera and Wijeyadasa Rajapakshe in 1999 against UNP MP Dr. Rajitha Senaratne, who lost his seat as a result.