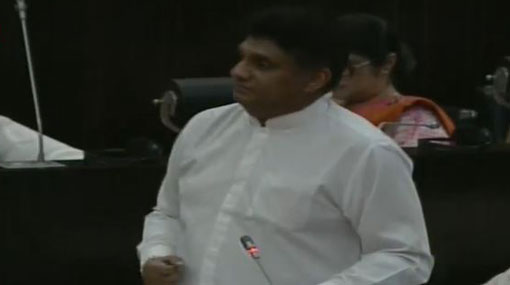 A motion expressing confidence in the UNP Leader Ranil Wickremesinghe to function as the Prime Minister has been presented to the parliament.

The motion was presented to the parliament by United National Party (UNP) Deputy Leader Sajith Premadasa.

The motion reads, “that this House resolves that Hon. Ranil Wickremesinghe, Member of Parliament commands the confidence of Parliament to function as the Prime Minister.”

Presenting the motion, Premadasa stated that the events of the past 6 weeks have resulted in creating a constitutional crisis of immense and monumental proportions.

He said that the actions of the Chief Executive have brought about an anarchical situation in the motherland and that it has promoted lawlessness.

Quoting former US President John F. Kennedy, he said that “we shall pay any price, bear any burden, meet any hardship, support any friend, oppose any foe to assure the survival and success of liberty.”

He also said that it is most appropriate at this juncture to remember the words of Abraham Lincoln who said:

“Don’t interfere with anything in the Constitution. That must be maintained, for it is the only safeguard of our liberties.”

Premadasa requested to safeguard the motherland at least now by appointing UNP leader Ranil Wickremesinghe as the Prime Minister as he commands the confidence of the majority of the Parliament.

The motion was seconded by MP Mangala Samaraweera while a Vote of Confidence is expected to be taken at the end of the debate on the motion.

Stating that, until the 26th October Ranil Wickremesinghe conducted a strong government with the confidence of the parliament, MP Samaraweera said that he will be presenting the parliament with a document containing all services done by the UNP during the past government.