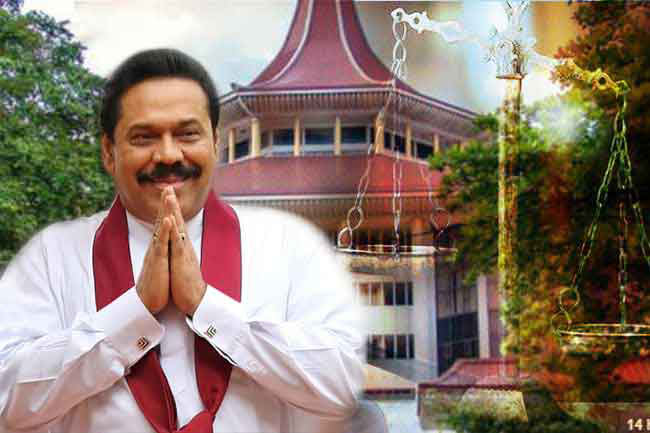 The Supreme Court has decided to take up the appeal of Mahinda Rajapaksa against the interim order of the Court of Appeal on the premiership on the 16th, 17th and 18th of January 2019.

However, the request of the petitioners for a stay order on the interim order restraining Mahinda Rajapaksa from holding office of Prime Minister and his Cabinet from functioning has been unanimously rejected by the Supreme Court.

The Court informed the parties that if they wish the petition to be heard before a five-member judge bench, they should refer the request to the Chief Justice.

Justice Eva Wanasundera, who was a part of the three-judge panel which considered the appeal today, stated that she considers all cases as equal and that she does not pass judgments based on the person.

The appeal filed against the interim order issued by the Court of Appeal restraining Mahinda Rajapaksa from holding office of Prime Minister and his Cabinet from functioning, was taken for consideration by the Supreme Court, today (14).

Meanwhile, a lawyer on behalf of Ranil Wickremesinghe filed a motion before the Supreme Court requesting a five-member judge panel for the hearing of the aforementioned appeal. However, this motion was rejected by the Supreme Court after considerations.

A second motion was filed at the Supreme Court by 122 MPs who are named respondents of the appeal, requesting the relevant appeal not to be heard before Judge Eva Wanasundara in fear of a biased judgment.