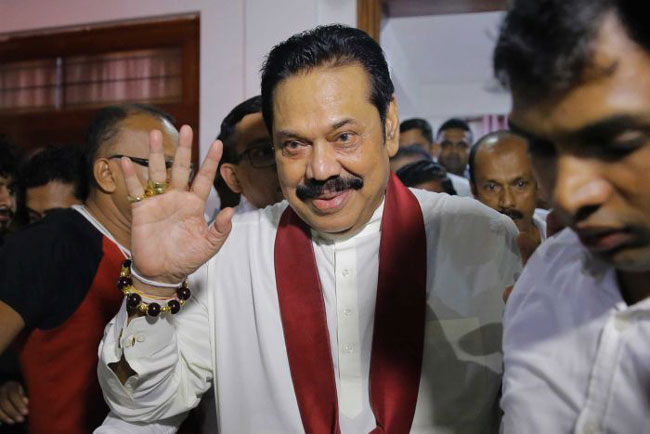 Mahinda Rajapaksa to resign from Premiership

Former President Mahinda Rajapaksa has decided to resign from the Premiership in order to ensure stability of the country, according to MP Namal Rajapaksa.

In a twitter message, he said that Rajapaksa will step down tomorrow following an address to the nation.

The MP further said that the Sri Lanka Podujana Peramuna (SLPP) along with the former President, the Sri Lanka Freedom Party (SLFP) and other will work to form a broader coalition with President Maithripala Sirisena.

“To ensure stability of the nation, Former President Mahinda Rajapaksa has decided to resign from the Premiership tomorrow after an address to the nation. The SLPP with Frm President, SLFP & others will now work to form a broader political coalition with President Sirisena,” Namal Rajapaksa tweeted. 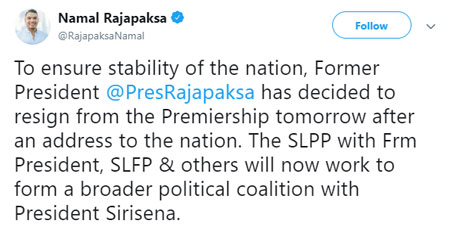 This was also confirmed by UPFA MP Lakshman Yapa Abeywardena, who told reporters that Mahinda Rajapaksa will make a special statement tomorrow morning and step down from the Prime Minister post.

He told reporters that Mr Rajapaksa decided in a meeting Friday with President Maithripala Sirisena to resign to allow the president to appoint a new government.

Sri Lanka has had no functioning government for nearly two weeks and is facing the prospect of being unable to pass a budget for next year.

“Unless the prime minister resigns, another prime minister cannot be appointed. But the country needs to face situations that it needs to face in January; a country cannot function without a budget,” Mr Abeywardena said. “Therefore Mr Rajapaksa says that he will make a special statement tomorrow and resign from the position of prime minister.”

The announcement comes following a meeting of the UPFA parliamentary group under the patronage of President Sirisena and former President Mahinda Rajapaksa, at the Presidential Secretariat earlier today.

Speculation had been rife that the government will resign after waiting for the Supreme Court judgement today in their appeal against lower court order restraining them from functioning in their posts.

The court had refused to grant a stay order against the Appeals Court interim order, however granted leave to proceed with the hearing of the petition in January.

Supreme Court on Thursday struck down President’s order to dissolve parliament and hold early elections saying it is against the purview of the constitution.

The seven-judge bench unanimously made this judgment stating that it was illegal to dissolve the parliament before its four and half year term limit.

Sri Lanka has been gripped by a constitutional crisis since the President sacked then prime minister Ranil Wickremesinghe on October 26 and replaced him with former president Mahinda Rajapaksa.

Wickremesinghe’s party led the petitions against the dissolution and the three-judge bench, headed by the Chief Justice Nalin Perera, read out the decision to a packed court guarded by hundreds of heavily armed police and commandos.

The court suspended a proclamation issued by Sirisena on Friday sacking the legislature and calling for elections on January 5.