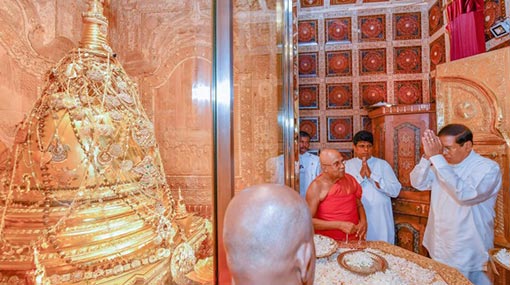 2019 a year to work without corruption- President

President Maithripala Sirisena visited the historic Temple of the Sacred Tooth Relic today (31) to pay homage to the sacred Tooth Relic and secure blessings for the New Year, the President’s Media Division stated.

Later, he had visited the Malwathu Maha Viharaya and called on the Most Venerable Thibbatuwawe Sri Sumangala Maha Nayake Thero.

During this meeting, the Nayake Thero, chanting Seth Pirith, invoked blessings on the President for the New Year.

Venerable Wedaruwe Upali Thero has also chanted Seth Pirith and invoked blessings on the President for the New Year.

President Sirisena also observed the construction works of the new ‘Dana Shala’ (a hall for almsgiving) and Archaeology Centre at the Asgiriya Gedige Rajamaha Viharaya.

Addressing the media personnel at the venue, the President said that he had named the year 2019 as a year to ‘Work without Corruption’.

The President said that all should unite to face the challenge of building the country and integrity through their conscience.

After that, the President also inquired into the wellbeing of the Mahanayake Thero of the Ramanya Maha Nikaya, Ven. Napana Pemasiri Nayaka Thero, who is currently receiving treatment at the Kandy General Hospital.

The President had then visited the Nayaka Thero at the hospital to inquire into his health condition and to wish him an immediate recovery.