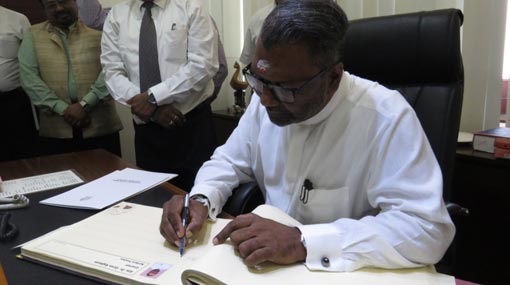 Name boards in North should be in both languages  Suren Ragawan

Newly appointed Governor for the Northern Province Suren Ragawan says that where there is no law, there is no democracy. Sinhalese and Tamils, everyone should work together, he said.

Name boards of all government institutions in the Northern Province should be printed in both Sinhala and Tamil languages, stated the Governor. He says that this is important as it is of convenience to both Sinhalese people who arrive from the South and the Tamil people who live in the North.

Suren Ragawan mentioned this assuming his duties as the new Governor at the Governor’s Office, yesterday (09).

Stating that not checking on the need of the public and strengthening the hub is also considered taking away the rights of the innocent, the new Governor requested all to give their support for the upcoming developmental activities in the North.