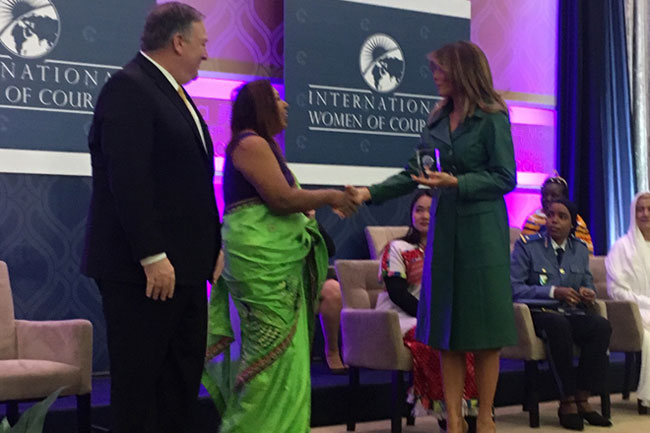 Marini de Livera was honored for her dedication and pro bono legal work on behalf of women and child victims of crime, defense of children in orphanages, and the innovative use of visual arts and street theater to promote legal literacy.

Her dedication to helping women and child victims of crime has made her one of the 10 recipients of the 2019 International Women of Courage award, a prize presented by the U.S. Department of State to women who have risked their lives fighting for peace.

At the award ceremony on Wednesday, US Secretary of State Mike Pompeo called De Livera “a crusader against child exploitation in Sri Lanka who offers pro bono legal services to child victims of crimes.”

A pro bono attorney with a degree in speech and drama from Trinity College London, De Livera has served as the chairperson of Sri Lanka’s child welfare agency, the National Child Protection Authority (NCPA), and now runs Sisters at Law, an advocacy group for impoverished women and children.

She is also a member of the Steering Committee on the Rehabilitation of Child Soldiers, the Prisons’ Reforms Committee, and the National Committee on Women. She also chaired the committee that drafted the amendments to the Prevention of Domestic Violence Act and worked as a Human Rights Trainer.

In an interview with NPR, speaking about the award De Livera said: “For the first time in my life, I feel appreciated.”

“This experience in the United States convinced me that, as a change-maker, I’m doing what the world and the people of the world are crying out for help for. I’m responding to them.”

Secretary Pompeo hosted the Annual International Women of Courage (IWOC) Awards at the State Department on March 7 to honor 10 extraordinary women from around the world. First Lady of the United States, Melania Trump delivered special remarks at the ceremony.

Now in its 13th year, the Secretary of State’s IWOC Award recognizes women around the globe who have demonstrated exceptional courage and leadership in advocating for peace, justice, human rights, gender equality, and women’s empowerment, often at great personal risk and sacrifice. Since the inception of this award in March 2007, the State Department has recognized more than 120 women from more than 65 different countries.

Names of the 2019 awardees are listed below: