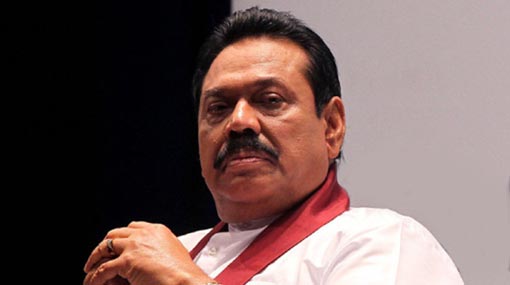 Mahinda tells what stand SL should take in Geneva

The Leader of the Opposition Mahinda Rajapaksa states that Sri Lanka should no longer co-sponsor resolutions against the country at the United Nations Human Rights Council (UNHRC).

Issuing a press release titled ‘The stand Sri Lanka should take in Geneva’, the Opposition Leader says that the government will be co-sponsoring another resolution against the country at the UNHRC in Geneva.

He points out that by co-sponsoring Resolution 30/1 previously, the government of Sri Lanka accepted a report which accused the Sri Lankan armed forces of war crimes.

The release states that apart from no longer co-sponsoring resolutions against Sri Lanka, people of the country wants the government to refute the allegations in the OHCHR Report No 30/61.

Stating several conditions that the country would like to see according to Rajapaksa, he says that anything short of these conditions would be to betray the people of Sri Lanka.

The complete message of the Opposition Leader is as below:

“The government has announced that they will co-sponsor yet another resolution against Sri Lanka in the UN Human Rights Council. Resolution 30/1, the first such co-sponsored resolution in October 2015 committed the government to among other things, setting up a hybrid war crimes court with the participation of foreign judges, prosecutors and investigators and to removing by administrative means, individuals in the armed forces suspected of human rights violations even if there is insufficient evidence to charge them in courts. By co-sponsoring Resolution 30/1, the Sri Lankan government officially accepted Report No: 30/61 dated 28 September 2015 prepared by the Office of the High Commissioner on Human Rights (OHCHR), which directly accused the Sri Lankan armed forces of many crimes including torture, enforced disappearances, deliberate targeting of civilians and the denial of humanitarian assistance to civilians.

In partial fulfillment of the numerous pledges given in Resolution 30/1, the government forced through Parliament the Office of Missing Persons Act after a farcical debate of less than 40 minutes in August 2016. The Office of Missing Persons can issue summons, examine witnesses, and hold hearings and is actually a tribunal in all but name. Its officers can search any police station, prison or military installation at any time without a warrant and seize any document or object they require. Government bodies at all levels including the armed forces and intelligence services are mandatorily required to render fullest assistance to the OMP even in contravention of the Official Secrets Act.

In March 2018, acting against the repeated requests of the Maha Sangha, the government passed the Prevention of Enforced Disappearances Act No: 5 of 2018 to incorporate into local law, the provisions of the International Convention against Enforced Disappearances. This enables an alleged enforced disappearance in Sri Lanka to be investigated and prosecuted in a foreign country as if it was an offence committed in that country. The country that arrests a Sri Lankan citizen on such grounds, has the option of handing that individual over to the International Criminal Court. Furthermore, foreign governments can request the extradition of persons suspected of having committed enforced disappearances in Sri Lanka to stand trial in their countries.

In August 2018, the government passed amendments to the Mutual Assistance in Criminal Matters Act No: 25 of 2002 to widen its applicability to a larger number of countries and also to international organizations such as the International Criminal Court. This law relates to facilitating cooperation between Sri Lanka and foreign countries and organizations in locating witnesses or suspects, issuing summons and other documents on such persons, the obtaining of evidence, the execution of search and seizure requests etcetera. The UN Human Rights Commissioner in her report on Sri Lanka to the current session of the UNHRC, has called on member states of the UNHRC to investigate and prosecute those suspected of war crimes in Sri Lanka under the principle of universal jurisdiction. The direct connection between this request and the new laws passed by Sri Lanka, is self-evident.

The contents of the UN Human Rights Commissioner’s latest report in addition to similar reports in previous years, gives rise to the question whether Sri Lanka is any longer a sovereign nation. From Geneva, she has stressed the need for the Sri Lankan government to devolve of political authority. She has expressed her displeasure at the appointment of Major General Shavendra Silva as the Chief of Staff of the Sri Lanka Army. Shehas stated that the panel of experts report tabled in the Constitutional Assembly by the Prime Minister could be the basis for a new constitution for Sri Lanka. With such supervision of our affairs from Geneva, why do we need an elected government?

Resolution 30/1 which sought to betray our armed forces and wartime leaders to interested foreign parties was co-sponsored by the yahapalana government at a time when they were expecting large inflows of foreign aid. Quisling regimes established through foreign intervention in certain other countries were in fact rewarded with increased aid in exchange for handing over the deposed political and military leaders to interested foreign powers in order to ensure that the nationalist forces in those countries never rise up again. I am quite convinced that the open and unashamed treachery in co-sponsoring Resolution 30/1 was due to such expectations on the part of this government.

This year, the British government is driving the process against Sri Lanka in the UNHRC because the USA has left the UNHRC calling that body ‘a cesspool of political bias’. Governments change in all countries and with it attitudes and policies also change. The international order that saw the passage of Resolution 30/1 is changing, but because we still have a government that identifies with the old world order, Sri Lanka has not been able to reap the benefits of the changes that have taken place in the world since 2016.

In Britain Lord Naseby has been trying to persuade the British government to drop the campaign against Sri Lanka in the UNHRC. He has in his speeches in the House of Lords explained how the 2011 Darusman report compiled by an unofficial committee appointed by the then UN Secretary General Ban Ki Moon had arbitrarily plucked the figure of 40,000 civilian deaths out of thin air. He has recounted how the then British Defence Attaché in Sri Lanka Lieutenant Colonel Anton Gash, had told him in January 2009 that he was surprised at the ‘controlled discipline’ of the Sri Lankan army and the solicitous manner in which they looked after the civilians who escaped from LTTE captivity. Lord Naseby has obtained from the British Foreign and Commonwealth Office copies of the dispatches filed by Lt Colonel Anton Gash which despite being heavily redacted, prove that it was never a policy of the Sri Lankan Government to kill civilians.

Furthermore, five renowned international experts in the law of armed conflict namely, Sir Desmond de Silva QC, Professor David Crane, Sir Geoffrey Nice QC, Rodney Dixon QC, and Professor Michael Newton have examined the allegations against Sri Lanka and provided written opinions to the effect that no violation of the law of armed conflict had taken place during the final stages of the war. Major General John Holmes, a highly decorated British Special Forces Commander has done a technical evaluation mainly of the allegations of the indiscriminate use of artillery during the final stages of the war and stated in writing his conclusion that there is no indication that the Sri Lanka Army deliberately or disproportionally targeted the civilian population. He has criticized the interpretation of satellite imagery in the Darusman report of 2011 on which these allegations are largely founded.

Most of these experts who have expressed views in favour of Sri Lanka are British citizens, yet the Sri Lankan government has not engaged with the British government to have the passage of these resolutions stopped. There is now a government delegation in Geneva with representatives of both the President and the UNP government attending the 40th Session of the UNHRC. Speaking of the new draft resolution that is now on the table, Minister Lashman Kiriella said in Parliament that Sri Lanka has been praised for the progress made and that there was nothing wrong in co-sponsoring that resolution. Indeed, there are some words of praise in the draft resolution, but that is for things like the treachery committed by this government in readily cooperating with their foreign overlords and passing the new laws that we mentioned earlier. What is seen in a positive light by the foreign masters of this government translates directly into a betrayal of Sri Lanka.

In reply to a question that I posed in Parliament, the minister of foreign affairs said that the government does not agree to everything in the UN Human Rights Commissioner’s latest report on Sri Lanka to the UNHRC and as an example of something that the government does not agree to, he mentioned an error in that report relating to the amount of land in the North released for civilian use. Disagreement on such trivialities means nothing. What the people of this country would like to see is a public announcement by the government which is also officially communicated to the UN Human Rights Commissioner and members of the UNHCR stating:

a) That Sri Lanka will no longer co-sponsor resolutions against itself in the UNHRC.

c) That hybrid war crimes courts with foreign judges and prosecutors will never be set up in Sri Lanka.

d) That Acts No: 14 of 2016, No: 5 of 2018 and No: 24 of 2018 which are highly detrimental to Sri Lanka’s sovereignty and the fundamental rights of its citizens, will be repealed and replaced with legislation more in keeping with our national interest.

All members of the delegation representing the government in Geneva should clearly understand that anything short of the above will effectively, be a betrayal of the people of Sri Lanka.”