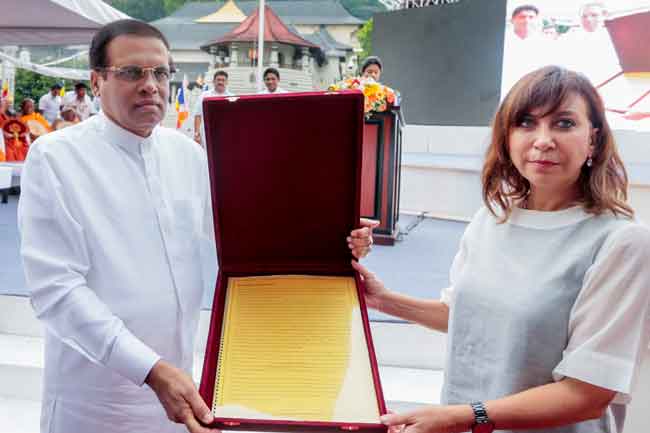 President hands over proposal to declare Tripitaka as a World Heritage

President Maithripala Sirisena today handed over the proposal seeking to declare the Theravada Tripitaka, the sacred scripture of Buddhists, as a UNESCO World Heritage to the UN Resident Coordinator in Sri Lanka, Hanaa Singer.

It was officially handed over during the national ceremony to announce the proposal made by Sri Lanka to the United Nations Educational, Scientific and Cultural Organization (UNESCO) to declare the Theravada Tripitaka as a World Heritage, with the assistance of all the Buddhist countries in the world.

The ceremony was held under the patronage of Maha Sangha including the Maha Nayaka Theros of the Tri-Nikayas and with the participation of President Maithripala Sirisena at the  Maha Maluwa (Great Terrace) of the premises of the Temple of the Sacred Tooth Relic on Saturday (March 23).

Addressing the ceremony the President said that the legacy of protecting, nurturing of the Tripitaka, which included the preaching of Gautama Buddha, and to present it to the world in writing, was lies on us as Sri Lankans.

He also said that till the Tripitaka published it was preserved by the Maha Sangha of Sri Lanka and further said that this by declaring this noble inheritance as a world heritage, Sri Lanka will receive an opportunity to obtain the ownership and trusteeship of it.

Furthermore, the President said that despite the opposition by some people with vested interests and attempting to challenge and confront this endevour, the steps to take forward the objective to declare the Tripitaka as a World Heritage will move ahead successfully.

President Sirisena said that the Tripitaka is a vast knowledge resource apart from being a religious philosophy. He also said that he is pleased to see that all the Maha Nayaka Theros of all the Nikayas sitting together invoked blessings for this noble task.

The Theravada Tripitaka was declared as a National Heritage of Sri Lanka by President Maithripala Sirisena on January 5, 2019 at the Aluviharaya Temple in Matale.

During the ceremony today, the Maha Sangha appreciated the effort taken by President Sirisena to declare the Theravada Tripitaka as a World Heritage.

President Sirisena has also taken measures to appoint a committee to advice the technical process of inclusion of Teravada Tripitaka in UNESCO’s Memory of the World Register.