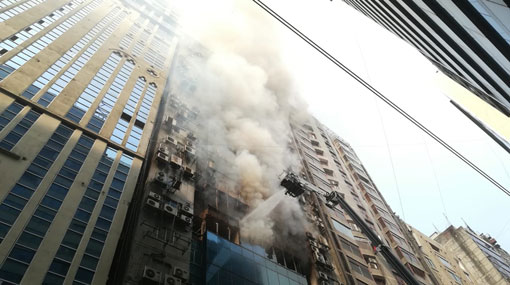 Dhaka fire under control, Sri Lankan among the dead

A total of eight deaths have been confirmed in a deadly fire that broke out at a building in Dhaka’s Banani area.

The fire broke out at FR Tower around 12:52 p.m. on Thursday, according to Fire Service spokesperson Ataur Rahman.

The Fire Service Duty Officer Mizanur Rahman claimed the fire was brought under control at around 4:45 p.m.

A fire service official, on condition of anonymity, said around hundreds of people have been rescued from the building till the filing of this report.

A 35-year-old man, identified as Abdullah Al Faruk, an MBA student at Dhaka University, was declared dead after he was rushed to the Dhaka Medical College Hospital (DMCH). Three others, Rezaul Ahmed, Abu Hossain, and Shabbir Ali Mridha were also admitted to the burn unit at DMCH, who are currently undergoing treatment.

A Sri Lankan citizen identified as Niras Chandra was declared dead at Kurmitola General Hospital. Officer-in-Charge (OC) of Cantonment police station Kazi Shahan Haque confirmed the matter saying the victim fell off the building while trying to escape the fire.

Parvez Sazzad was reported dead at a Banani clinic.

Maksudur, Munir and Mamun were declared dead on arrival by doctors at United Hospital. Senior Executive Sazzadur Rahman Shuvo of the hospital confirmed the matter.

A woman identified as Amina Yeasmin died of her injuries at Apollo Hospital.

Two more bodies were brought out from the building around 6:30 pm after the fire was put out.

Present at the scene, the authorities concerned confirmed that the Air Force, Bangladesh Navy, police and the Fire Service Department are working together to rescue the people inside.

The Fire Service has also announced a five-member probe committee to look into the fire.

A number of eyewitnesses claimed that fire service personnel arrived late at the scene, causing the fire to grow out of control.

Firefighters suspect the fire could have originated from the seventh floor and later spread to the other floors.

There have been reports that several people have been critically injured after jumping from the building. Victims were immediately taken to nearby hospitals for treatment. A television channel live report showed at least one person falling while trying to climb down the building.

Responding to a query, Dhaka Electric Supply Company Limited (Desco) Engineer Md Imran Hossain, Said: “The electrical supply line on top of the building has been disconnected to avoid a further deterioration of the ongoing situation.”

Eyewitnesses told the Dhaka Tribune that the fire service brought around five vehicles to the scene of the fire, but they did not immediately use all the resources available to them to bring the situation under control.

Till the filing of this report, the fire is yet to be brought under control.

Responding to a query, Inter-Services Public Relations (ISPR) Director Abdullah Ibn Zaid said: “Three Bangladesh Air Force Helicopters are aiding the search and rescue operations, along with teams from the Bangladesh Army and Navy. Many have taken shelter on the roof, and some are asking for rescue through windows.”

The officials concerned have reported that several groups of people have already been rescued from the burning building.