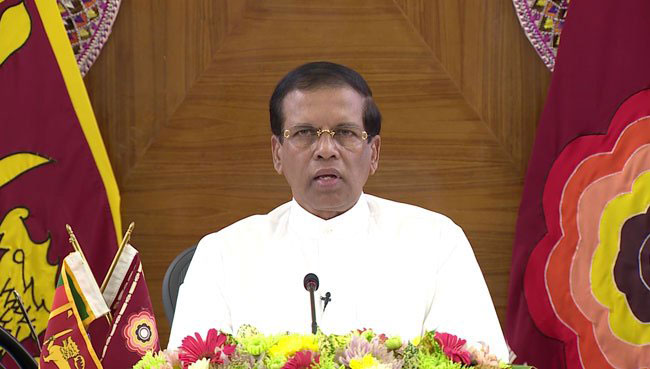 President says heads of security forces to change within 24 hrs

President Maithripala Sirisena says that he hopes to affect changes among the heads of the country’s security forces within the next 24 hours.

He stated this during his address to the nation, in the wake of Sunday’s devastating bombings targeting multiple churches and hotels in Sri Lanka.

President Sirisena pointed out that various discussions, dialogues, debates, and criticisms on these attacks are currently ongoing in the country and that he considers this a fundamental characteristic of a free and democratic society.

According to him, the security forces were reported of this terrorist campaign since 2017. They had also observed that these persons received training and guidance by joining international terrorist organizations.

“Our security forces constantly followed them and monitored them. However, the security forces did not possess enough evidence and clear information to take legal action against them. The activities of these persons were closely monitored at National Security Council meetings in the past years”, stated the President.

He also stated that these persons carried out these attacks under the guidance, support, and leadership of an international terrorist organization.

“We now have to enter into a process of establishing a free and peaceful tomorrow in the country,” said the President.

Therefore, I request all Sinhala and Tamil communities not to perceive the Muslim community in Sri Lanka with suspicion, fear or distrust. We should remember that not every Muslim person is a terrorist. Only a very few persons have joined these terrorist groups,” said the President.

“It is important to establish harmony and reconciliation between the Sinhala, Tamil and Muslim communities in the country. We need to with trust in everybody”, said President Sirisena.

The state of emergency was implemented with the aim of curbing the terrorist activities and the police and the tri-forces have been granted power to act on this by gazetting regulations on preventing terrorism, stated the President.

According to him, had this not been gazetted, the police would have lacked the necessary power they need to act on these events and the tri-forces could not have come into action.

“I personally take the responsibility that these regulations will not be used to hinder or challenge a democratic and free way of living,” added the President.

The President personally expresses his gratitude to the Police, the Tri-forces and Special Task Force officers for their efficiency and the Crime Investigation Division and Intelligence Services for their dedication in responding to this situation. The nation is indebted to the three Police officers who lost their lives in the investigations, he added.

He further said the government has already been able to crack down on many criminals, suspects and those responsible for the recent attacks. President stated he believes that a repetition of such gruesome acts of violence in the future could be avoided.

“At this time, basically, friendly as well as powerful 07, 08 countries have pledged to provide their fullest support to Sri Lanka in the process of curbing terrorism, we are hoping to work in coordination with them in the future. Currently, the issue of why our Intelligence Service did not take actions according to the information received by them from a State Intelligence Service of one of our friendly nation, has become a question and centre of discussion among the people, in the media as well as on political platforms,” the President stated.

“I should specially mention here that the responsible chief officers did not submit that information received by them to me. If they informed me about receiving that information I could have taken immediate actions,” he says. The President has decided to take stern actions against those responsible institutions for not fulfilling their respective duties properly.

The Cabinet including the Prime Minister gathered last evening and discussed in detail regarding this issue, the President stated. “That is why I have mentioned earlier an appropriate process will be implemented while completely reorganizing the security services including State Intelligence Service and Intelligence Units of the Police and Tri-forces, to prevent recurrence of these kinds of terrorist activities.”

President says that he has already planned necessary actions to build an environment where the people of this country could live freely and without fear in the future.

“Similarly, I would like to state a special issue at this time. As I mentioned earlier, we who speak about the experiences of over 27, 28 years prolonged brutal terrorist war as well as victories over it, must clearly understand the difference between these incidents and that terrorist group. I believe, in a situation like this we should speak using our intelligence, but not following the heart.”

The President assured that he would take action to control and curb this movement which involved with an international terrorist organization by utilizing modern technology as well as using the strategic methods of security forces and acquiring advice and guidance of countries which use technology against this kind of terrorism.

“We need to work without any political differences and religious divisions. We should clearly understand what is meant by racism and what is meant by terrorism. I believe as intelligent persons all of you have understood the dissimilarity between racism and terrorism. Therefore, we need to be vigilant, why this brutal terrorist organization chooses Sri Lanka in this manner,” the President says.

The President emphasized that everyone has a responsibility to prevent recurrence of this kind of experience which destroys the most peaceful environment in this country, creating fear and suspicion among the public. President noted that it is not the time to level allegations or point fingers against one another.