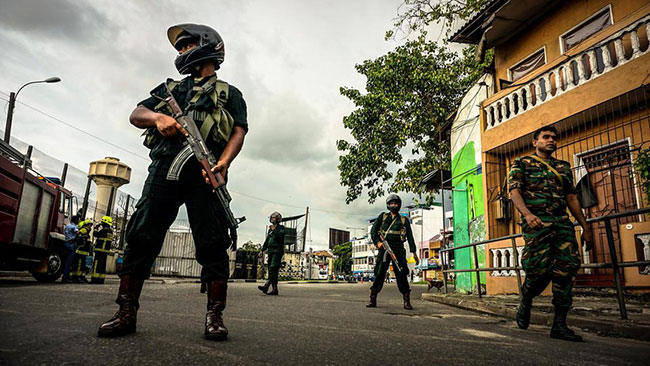 Sri Lanka Police advises the general public not to panic as security forces are conducting search operations across the country.

The public is requested to cooperate with security forces personnel carrying out the searches, the Police Spokesman said.

Police have set up roadblocks at several areas including within the city of Colombo as they search suspicious vehicles and individuals.

However, so far none of the roads in Colombo have been completely closed off for traffic, police said.

Earlier today the road in front of the Bandaranaike International Airport (BIA) in Katunayake was temporarily closed as security personnel had searched a suspicious vehicle entering the airport’s outer car park.

However, the road was reopened several minutes later as nothing suspicious was found inside the car.

The security at the BIA had been beefed up in the wake of the Easter Sunday bombings in several parts of the country.

Security officials had also reportedly ordered a lockdown at the central bank on Thursday due to a bomb scare with some officials saying they were instructed to remain inside temporarily.

Sri Lanka’s civil aviation authority has banned the use of drones and unmanned aircraft within Sri Lankan airspace until further notice.

The authority said it was taking the aircraft measure “in view of the existing security situation in the country.”

Sri Lankan police continued their search for explosives four days after suicide bombing attacks killed more than 350 people in and around Colombo.

Sri Lanka Army said that hundreds of Army Officers and Other Ranks immediately took up position around the country after the gazette notification conferred the powers of search, detention or arrest without warrant any person on members of the armed forces.

The attacks Easter Sunday mainly at churches and hotels killed at least 359 people and wounded 500 more, the government said Wednesday.

Most were Sri Lankan but the Foreign Ministry has confirmed 36 foreigners died. The remains of 13 have been repatriated. Fourteen foreigners are unaccounted for, and 12 were still being treated for injuries in Colombo hospitals.

Sri Lanka Police has said 58 suspects have been detained since the bombings.