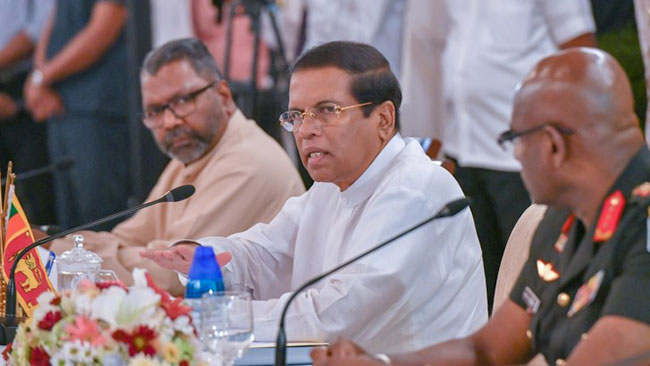 Police hunting for 140 suspects with IS links - President

President Maithripala Sirisena says he would not excuse himself from the lapse on the part of intelligence information sharing and the government should bear the responsibility for failing to prevent the attacks on Easter Sunday.

The President stated this addressing the Heads of media institutes today (26).

Stating that a major search operation has been undertaken and every household in the country will be checked, the President said lists of permanent residents of every house will be established to ensure no unknown persons could live anywhere. He pointed out that during the fight against LTTE terrorism, similar methods were adapted.

On 4th of April, an intelligence agency letter from a friendly foreign country sent on April 4, warning about possible attacks, however, he was not notified of this, the President says. He blamed on the weakening of military intelligence forces and needless imprisonment and suppression of military officers as the main reasons for the lapse.

President says this intelligence information had been received by the IGP, the Defence Secretary and five other DIGs of Police, yet only one of them acted on it. President commended DIG Priyalal Dassanayake, in charge of Colombo’s special security division, for fulfilling his duty by notifying the relevant authorities in this regard.

The President had left for India on April 16th for a personal visit and then for Singapore. This letter containing intelligence information on the attacks had whirled around only between the IGP and the Defence Secretary from 4th to 16th of April.  Yet, neither of them had let him in on the relevant letter prior to his departure to India, claims the President. President Sirisena says he was slated to return to the country on April 21st after concluding his personal foreign tours. The President says learned of the Easter Day attacks through social media and that the authorities failed to inform him.
IGP and the Defence Secretary have neglected their responsibilities by failing to at least telephone him to impart this piece of information, the President accused. President Sirisena added that the IGP and the Defence Secretary had visited him on April 14th to greet him for the Sinhala and Tamil New Year, yet they had not mentioned anything concerning the intelligence information even at that encounter.

He says that he believes the IGP would resign during the course of the day and that a new Defence Secretary would be appointed to the already vacated position by Hemasiri Fernando. The IGP was not able to respond when confronted at the Security Council on April 22nd regarding who is to be held accountable for this unfortunate situation, the President further says.

Addressing the press conference, the President urged all Sri Lankans not to look at the entire Muslim community as terrorists. ‘There is an ample link between religious extremism and drug trafficking in the world. It is possible that the attacks hastened due to the drug eradication programme carried out by me,’ he stated.

Speaking on the ongoing investigations and search operations, the President stated that at least 70 suspects have so far been arrested in connection with the attacks. However, information was received that there are 130-140 persons in the country with links to the Islamic State, he added.

The security forces are expediting investigations to arrest these suspects, while a group of experts has also arrived in the country to provide assistance in this regard. President ensured that he would take all the necessary measures to wipe out terrorism from the country.